The app is a rare example of an Aussie brand developing a promotion exclusively for iPhone users. I’m talking about the development of an actual application, rather than the increasingly passe trend of giving an iPhone away as a prize. Or, strangely, giving iPhone users free access to Twitter and making a big fuss about it.

The iPhone currently commands 17 percent of the smartphone market worldwide and 8.1 percent of smartphone sales in the Asia Pacific, so it’s a sizeable channel clearly worth targeting, particularly as many brands are beginning to realise that there is no single golden egg to digital marketing. (Pun fully intended… Boom-cha!).

It’s a neat app, and could easily become a family favourite (or a very amusing drinking game). But, for the same reasons why CUB raised the ire of Mumbrella earlier this week, I was slightly disappointed to discover that ‘Egg Racer’ does not include a social media element.

The viral capacity of the game would improve vastly if I was able to tweet my score. Or post it to facebook. There currently isn’t an option to do either of these things. Instead my score (and much of the games sociability) lives entirely in its own little microsite. Strange.

Gripes aside, the Anthill crew will be racing eggs throughout the office once beer o’clock strikes. Despite the lack of sociability, the initial splash and publicity will far exceed the impact of this ‘beat up’ (and, no doubt, will sell lots of chocolate Easter Eggs).

Now, didn’t I promise to show you how to win this game?

To promote the launch of its game, Coles is offering a $1,000 gift card to th ‘egg racer’ with the highest score when the competition closes on 22 April 2010. At the time of posting this article, your dear author is the holder of said highest score! 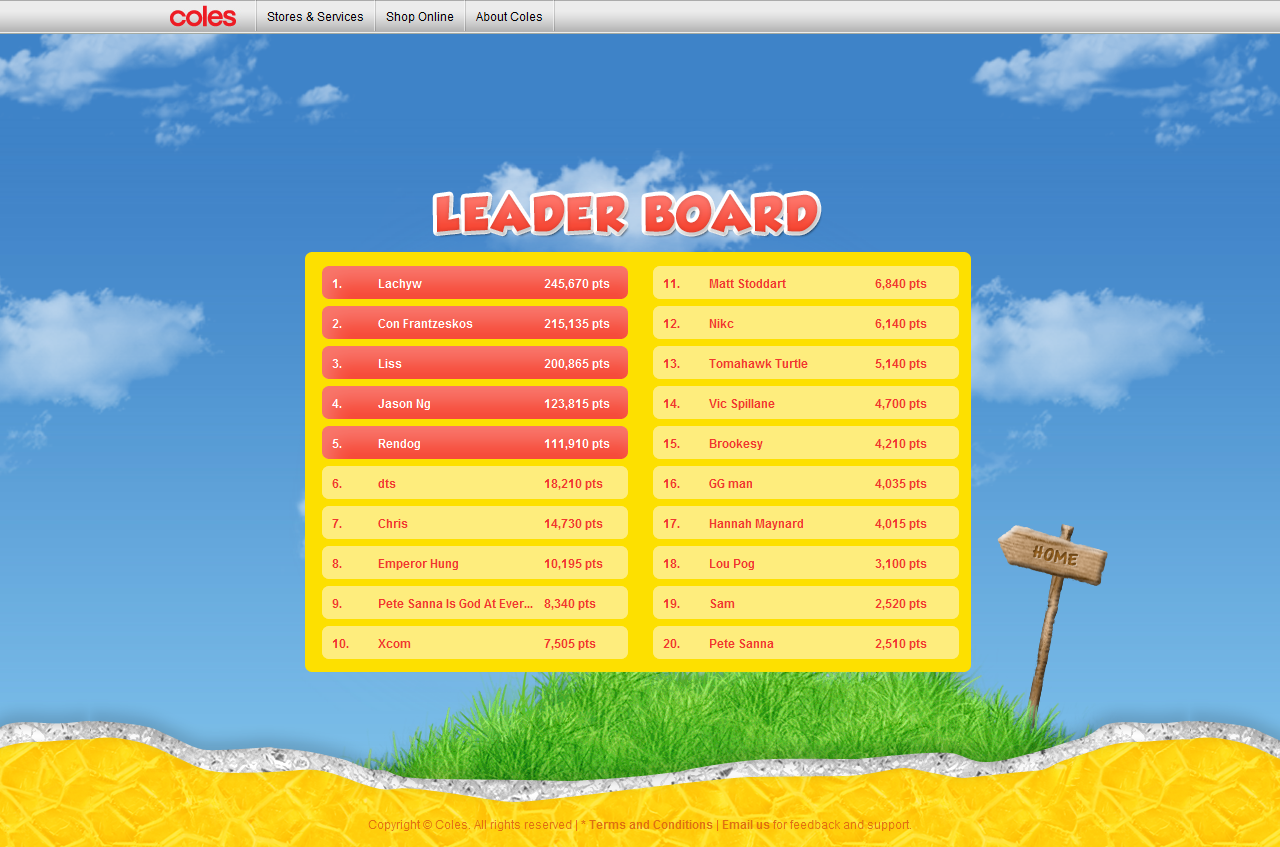 Click the image to see my triumph in all its glory. (Note: I don’t normally win things, hence my excitement.)

Despite appearances, I didn’t take the game on a (very) long walk, as my competitors no doubt endured. No, in true Gen-Y style, I figured out how to game the ‘Egg Racer’ game.

So, for your prize winning benefit, I present:

Coles Egg Racer game and how to beat it