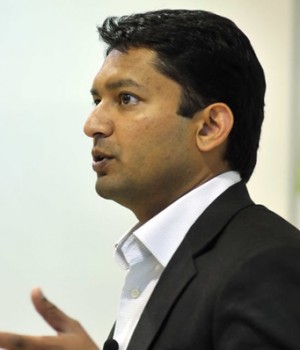 Ash Maurya, one of Silicon Valley’s most recognised thought leaders in the global start-up space and the widely influential author of start-up bible Running Lean, has teamed up with Sydney accelerator Slingshot to offer his Bootstart program locally.

Slingshot is the first accelerator outside of the US to be the official partner of Bootstart, an eight-week online program conducted by Maurya and is open to anyone who wants to start a new business or launch a new product, with the inaugural intake in mid-June.

It will include live webinars, mentor meetings and access to Maurya whose five star-rated book, Running Lean, has received lots of praise and validation from the business and start-up community. Many believe it’s a must-read for anyone seeking to create successful companies.

Why are Ash Maurya and Slingshot teaming up?

“Having met Slingshot earlier this year on my last trip to Australia I was hugely encouraged that they shared the same philosophy as I do regarding developing start-ups,” Maurya said. “We both recognise that the foundation of great businesses is the business model not the idea”

Slingshot will also use the Bootstart content in the first four weeks of its accelerator program to ensure that participants in its accelerator have robust business models that are scalable. Maurya says he’s looking forward to seeing what effect this will have on the outcome of the next Slingshot intake.

The remainder of the program will involve leveraging Slingshot’s resources to refine business models, marketing strategies and customer acquisition before pitching to secure additional capital for growth.

“We are looking to deliver the best accelerator program in Australia and the content from Ash Maurya allows us to offer our participants something that is globally recognisable but more importantly a proven curriculum that has been rigorously tested,” Slingshot co-founder Craig Lambert said.

“It is clear that Ash’s status and knowledge in the global start-up space has been distilled into the Bootstart program. We want to help Ash deliver that knowledge for the benefit of our start-ups and corporate clients,” he added.

The emphasis on the program is on creating better entrepreneurs through coaching and external accountability versus forcing their ideas through.

The philosophy is a synthesis of several methodologies including Running Lean, Lean Startup, Bootstrapping, Jobs-to-be-done, and Systems Thinking.

What does Ash Maurya think about Aussie start-ups?

What do you think about how the Australian start-up space compares to Silicon Valley, we asked. It turns out Maurya actually believes one can’t really compare the Aussie startup space with Silicon Valley. Below are the thoughts he had to share with Anthill.

“There’s a lot to learn from Silicon Valley’s success but every city’s identity is different.

“Too many cities (including Austin where I live) have attempted to mimic Silicon Valley in the past and failed. They usually try to mimic the obvious investment ecosystem, universities, and talent that Silicon Valley has but that’s not enough.

“Silicon Valley’s secret sauce is that they have overcome the taboo of failure.

“Start-up teams there work a lot like professional sports teams. They are all going for the championship and if they don’t get the cup, they pick themselves up, sometimes switch teams, and try again.

“The game of basketball used to be a US dominated sport. It no longer is the case. We need to do the same for the game of entrepreneurship.

“For new ecosystems and especially a first time entrepreneur, this is more easily said than done. But methodologies like lean, help to replace big wipe out type of failures with much smaller iterations which I won’t even characterize as failures but incremental learning.

“Rather than trying to mimic Silicon Valley, every city should uniquely differentiate themselves based on their identity and culture and use techniques we now know to accelerate the search for good local and global business models.”