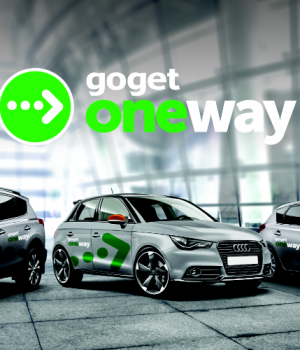 There are companies that make life easier for you, and then insist on making it even easier. If you think carsharing has solved your problem of commuting affordably without owning a car, then GoGet has a surprise in store.

The company has recently announced the Oneway carshare service, a first for Australia.

Caresharing has always involved driving the vehicle back to its original pickup point.  GoGet, apparently the nation’s first and largest careshare company, will permit drivers to pickup a car and then leave it at or near their destination.  The service will be rolled out in select locations over the coming months, including major airports.

“Imagine being able to arrive at the airport, hop into a carshare vehicle, drop it off in the city and then forget about it.  That’s what Oneway can offer,” said Tristan Sender, CEO of GoGet carshare.

According to Sender, Oneway was designed for its business clients’ needs. Organisational use has grown rapidly in recent months, and many medium to large businesses are now using carshare and giving up their fleet cars as a result.

Oneway increases travel flexibility, but still ensures that drivers have a designated parking place to drop their vehicle at the end of their trip.

Pushing the envelope so commenting is less of a chore.

Hold on to your reins if you think that this service is all ready to rock and roll. According to Sender, the technology and logistics behind Oneway are complex and there will be a learning process to determine how the new service will work best for all its members.

Well, if it works well, that’s 65,000 members across Australia benefitting from the service.

“We are always looking for ways to make transport great.  Oneway is part of GoGet’s commitment to transport innovation, like our ongoing work with UNSW on driverless cars,” Sender said. “Community and business integration is our lifeblood. We want to learn how oneway will perform in real-time and on Australian roads.”

Sender is not the only one excited, obviously.  Vinayak Dixit, Deputy Director, Research Centre for Integrated Transport Innovation (rCITI), said “Oneway carhsare is an exciting next step, and fits with some of the progress we have made on the driverless car project over the past several months.

Just before Oneway, GoGet has launched the Central Park “SuperPod” which largest cluster of carshare vehicles in Australia to be housed at the $2 billion development in Chippendale.  And if you ask me, that’s what a smart city should have.

Folks living where GoGet operates (Melbourne, Sydney, Adelaide and Brisbane) can register their interest to take part in the Oneway trial at www.goget.com.au/oneway