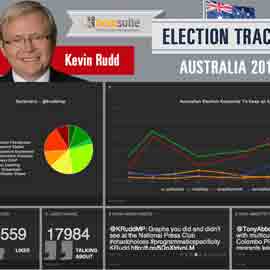 Three years ago, when Australia last went to the polls, social media was only just emerging. It didn’t quite sway voters one way or the other. But, this time around, it’s going to be wholly different.

Prime Minister Kevin Rudd, considered the political king of the social realm, thinks nothing of tweeting about a shaving nick on social media, determined to share his “human side.” Rival Tony Abbott pales somewhat in comparison. But a photo he posted of himself with his two daughters was a hit, again revealing a human side to Australians.

With high social media penetration – nearly half the population is on Facebook and over 10% use Twitter each month – political parties are already jostling for social media attention and this year’s elections, due by November, is poised to be the nation’s first that is fully battled on the likes of Facebook, Twitter and other media.

A Canadian software maker has become one of the first to weigh in on the emerging social battle. HootSuite sells its powerful specialised analytical software to private sector clients such as Virgin, PepsiCo and Sony Music. But on this occasion, it’s merely demonstrating the power of its software by analysing the social media activity related to the Australian elections.

HootSuite has set up an Australian Election Tracker that in real-time sizes up the social media activity – and brownie points – of Rudd and Abbott. It will monitor the following:

“Social media is revolutionizing politics. It’s opened up whole new lines of communication between people and their governments and it’s letting those important conversations happen in a very public and transparent way,” said Ryan Holmes, the HootSuite CEO. “The Australian election is a perfect example of how both politicians and voters can now leverage social media to ensure their voices are heard, when it comes to what matters to them and their country. And we’re excited to provide an integral tool in the process: the HootSuite command centre.”

HootSuite says its software including a so-called “social media command centre” has been used to compare the social media success of the Baltimore Ravens and the San Francisco 49ers leading up to Super Bowl XLVII, as well as President Barack Obama and Senator Mitt Romney during their 2012 U.S. election campaigns. It claims a global user base of 7 million.