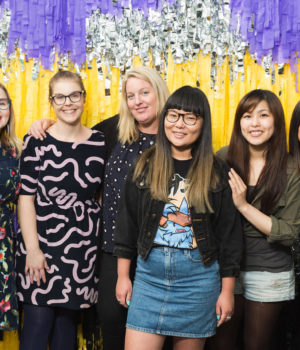 Providing a premium opportunity for women looking to hone their skills in game development, #SheHacksGames is a weekend game jam where women will be strategically matched into teams and have two days to create a game of any genre and any platform. Hosted at the home of the video game creation industry in Australia, The Arcade, participants will be guided by key mentors from the game development industry.

The initiative is designed for women who are new or early into their gaming careers and are seeking more hands-on experience, more exposure to the industry, and more opportunities to experience how their skills fit within the game development industry.

Currently, only 18 per cent of employees within Australia’s video game development industry identify as women, yet women are consuming games just as much as men.

What is the motivation behind #SheHacksGames?

Girl Geek Academy co-founder, Lisy Kane, is driving the program based on her dedication to increasing the number of women visible in key positions within the industry, which she believes is a huge barrier to other women seeing themselves as valuable contributors to the gaming community.

In 2017, Lisy was recognised by Forbes in its prestigious top 30 list: Forbes 30 Under 30: Games. Ranked alongside the world’s best game makers, Lisy was the only Australian to make the who’s who of the global gaming industry. Lisy also made this month’s CNET’s International Women’s Day list for her work in inspiring more women into the industry.

“Australia’s video game development industry is worth around $2.96 billion annually. That’s an incredibly lucrative market, so if only 18 per cent of current contributors are women, I would suggest that we’ve not nearly reached our potential. We know that almost half of video game consumers are women, and many want to play diverse games developed by diverse teams. The problem is that there is a lack of opportunities for women to develop their skills in the industry, and that’s exactly what we hope to address with our inaugural #SheHacksGames event”, said Ms Kane.

#SheHacksGames will bring together women with the different skill sets that form the basis of a game development project team. A programmer, who will be responsible for the game mechanics, technology and coding skills. A designer, who will take the creativity lead and be responsible for the look and feel of the game. Plus a producer, who is passionate about game creation and will keep the project on track, on time and oversee that all the elements have been thought through.

#SheHacksGames is a spin off from Girl Geek Academy’s annual #SheMakesGames program, which runs alongside Melbourne International Games Week and provides an evening of networking and industry education for women who are interested in entering the industry. Last year’s #SheMakesGames delivered key notes and programs from award-winning game developer, Anna Tito, European game developer currently working in Melbourne in collaboration with NASA, Jennifer Scheurle, and the Lead Principal Engineer at Unity Labs in San Francisco, Dio (Dioselin Gonzalez).

Girl Geek Academy co-founder and CEO, Sarah Moran, said: “We are so excited to launch our inaugural #SheHacksGames event, which we curated in direct response to our community who wanted an opportunity to roll up their sleeves and get started in game creation. We’ve created the event using the structure of our successful annual #SheHacks event, however with a pure focus on games so we can attract the right mentors and help get ideas off the ground.

“We’re hoping to help produce the next Holly Liu, a Silicon Valley “unicorn” who recently sold her gaming company, Kabam, for $US1 billion. Holly provided the key note at last year’s #SheHacks event and is testament that this industry absolutely needs more women.“

#SheHacksGames will run from 9:00 am on Saturday 28 April until 5:00 pm on Sunday 29 April.  For more information visit: http://girlgeekacademy.com/shehacksgames/