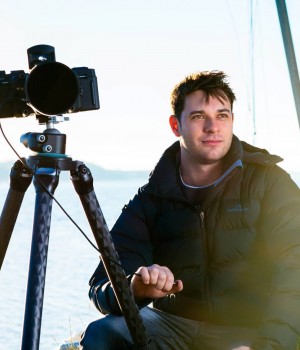 Destin Sparks had no interest in photography when he started out as a graphic designer and camera store salesperson. Surrounded by photography and camera enthusiasts, Sparks was a fish out of water.

However, when he quipped to a colleague that he could do better than his latest photograph, the bet kick-started his photographic career back in 2008.

With an established website that turns over six figures a year, Sparks can now safely say that he has made it – this is no mean feat in the creative field of photography.

He sells his work, showcasing Australia’s rare beauty, both nationally and internationally, and also runs regular workshops in Queensland to share the knowledge he has amassed about the craft with aspiring photographers.

Sparks has scooped a number of photography awards along the way and his work has been featured in renowned publications such as Australian Traveller and National Geographic.

Unbelievably though, Sparks is largely self-taught. He revealed to Anthill that despite attending one four-week photography course many years ago, he found himself teaching the instructor more than the instructor was teaching him!

Keeping it old school against the odds

Sparks’s equipment is extremely unique in that he still uses film – a Fujifilm GX617 with one single 90mm lens. The camera was last manufactured in 1992 and was the successor of the original G617 which was first made back in 1983.

He further disclosed that he does not use any Photoshop or filters to alter or manipulate his work in any way. This old school approach to photography is highly unusual in this day and age and sets Sparks apart from many of his counterparts.

However, this approach comes with its own set of pitfalls. Given that the equipment Sparks uses is no longer manufactured, finding technicians to look after it is a constant bottle.

“Keeping my scanner in running order is the biggest obstacle I have. I have found just one person in the United States who still services these machines and at 250kg, I can’t just pop it in the post for repairs,” he revealed.

Inspired by an Australian photography legend

Destin sees himself as following in the footsteps of the renowned Ken Duncan, who is widely regarded as one of Australia’s most acclaimed landscape photographers.

“When I started photography I wasn’t familiar with Ken but through absolute coincidence I actually purchased his old Heidelberg Drum Scanner off eBay! The scanner was used to digitise many of his most famous prints and is a work of art in itself – it weighs as much as a piano and is one of the last left in the entire world,” he said.

Sparks’s business takes him all around Australia and New Zealand to find the perfect photo.

He intends to travel further abroad to discover new corners of the world and potential landscape works. “I feel like I have only scratched the surface and I can’t wait to explore further what the world has to offer,” he remarked.