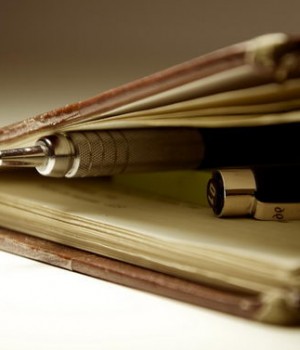 Some of the greatest people in history share one simple, but empowering trait. The habit of keeping a journal to reflect, innovate and discover has been credited with the unique perspective gifted to some of the world’s most recognised entrepreneurs, creatives, and leaders.

Extraordinary thinking is linked to three characteristics – the understanding, expression, and evolution of self.

You’ll find that the seven people mentioned in this list all discovered and enhanced their ability to grow into and out of their best selves through the art of journaling.

“Some of Virgin’s most successful companies have been born from random moments – if we hadn’t opened our notebooks, they would never have happened.”

For a man who’s developing intergalactic spacecraft, pioneering motor racing technology and overseeing a worldwide communications company, when he says he’s going to tell you about one of the most powerful tools in his arsenal, you expect it to be something pretty spectacular.

Branson credits a deal of his success to his notebook, an old fashioned binder he’s renowned for carrying everywhere. This simple, but effective habit was once a method he used to combat his dyslexia growing up, but slowly became one of his greatest professional assets.

“Note taking is one of my favourite pastimes,” he writes on Virgin’s blog. “I can’t tell you where I’d be if I hadn’t had a pen on hand to write down my ideas (or more importantly, other people’s) as soon as they came to me.”

This one technique has enabled Branson to successfully manage everything from global projects, negotiation assemblies and company innovation.

“No matter how big, small, simple or complex an idea is, get it in writing, but don’t just take notes for the sake of taking notes,” he writes. “Go through your ideas and turn them into actionable and measurable goals. If you don’t write your ideas down, they could leave your head before you even leave the room.”

She’s one of the most successful and influential people in the world. She’s donated millions to charity, opened a school in South Africa and provided housing to victims of Hurricane Katrina.

Despite this, Oprah believes that keeping a journal was the single most important thing she’s ever done.

Oprah has charted her path to success through the pages of her diaries since she was 15-years-old, remarking in a 2011 volume of O, the Oprah Magazine, how journaling enabled her to transform into a more purpose lead and self-aware person.

“I wrote a lot of bad poetry in my teens and 20s, mostly about how some guy had done me wrong. I used my journals as therapy. Oh, the time I wasted worrying about men and weight, and what other people thought! In my 40s, I got wiser. I started using journals to express my gratitude — and watched my blessings multiply.”

She now concentrates on writing down five things that have made her grateful on a daily basis. Oprah found that the more she journaled about the experiences she was grateful for, the more positive her perspective on life became. She realised the immense power the simple act of translating thoughts to words gave her.

“There is nothing like returning to a place that remains unchanged to find the ways in which you yourself have altered.”

Like Oprah, Nelson Mandela recorded the daily experiences he was grateful for, using journaling to find the light in the darkness during his 27-year imprisonment.

In 1980, he wrote that he was grateful to have milk in his tea, while in January 1990, he described the joy of seeing a flock of ducks clumsily waddling around the Victor Verser Prison compound.

“Suddenly they squawk repeatedly and then file out. I was relieved. They behave far better than my grandchildren. They always leave the house upside down.”

The journaling of these small observations arguably gave Mandela more sustenance than any kind of ration could, regularly reminding him of the simple beauty of life and how his journey remained uncompleted.

“To continue writing holds out the possibility that one day luck may be on our side…” Mandela wrote on June 1st, 1970, to Zeni and Zindzi Mandela.

“In the meantime the mere fact of writing down my thoughts and expressing my feeling gives me a measure of pleasure and satisfaction. It is some means of passing on to you my warmest love and goods wishes, and tends to calm down the shooting pains that hit me when I think of you.”

Writing gave Mandela the ability to lay his soul bare. The understanding and recognition of his emotions enabled him to shed light on a facet of himself that he might have never known existed, and through this, remain strong through the hardships of his life in order to achieve his ultimate purpose.

“More than once I have gone to luncheon with a number of our heads of department and have seen the sweat start out on the foreheads of some of them when that little red notebook was pulled out.”

This infamous red notebook rarely left the legendary businessman’s side, with Rockefeller oddly delighted by the thought of having every fact and figure of his enterprise residing in his coat pocket.

He regularly recorded notes during tours of his refineries, carefully writing down observations and designs as to how he could make his business more efficient.

The sight of him scribbling in his notebook quickly became known as the symbol of impending change, with Rockefeller renowned for his journal-inspired ideas.

“…There must be someone just like me who feels bizarre and flawed in the same ways I do…Well, I hope that if you are out there and read this and know that, yes, it’s true I’m here, and I’m just as strange as you.’”

Kahlo’s diary was, unsurprisingly, anything but traditional. A kaleidoscope of colour and a whirlwind of emotions, Kahlo’s journal paints a lurid picture of the artist’s life.

An intimate and perplexing experience, this recently discovered diary is a blend of words and paintings, a free-form homage to her colourful and often pain-ridden life.

“The diary is the most important work Kahlo ever did,” Claudia Madrazo, the promoter who pushed for the publication of the journal, told Vanity Fair.

Kahlo was the epitome of stream of consciousness journaling. Her entries withheld nothing, and the inner workings of her creative mind were laid bare on the pages.

“Keeping a written record of his work was a significant key to his genius.” – Cracking Creativity: The Secrets of Genius

Regarded as one of the best examples of journaling enabling the development of great intellect, Edison habitually recorded his thoughts, experiences, and ideas.

His intellectual notebooks are littered with hastily scribbled notes, chemical spills, and the odd rips and burns courtesy of the whirlwind of activity that was taking place.

Edison’s personal journal, on the other hand, was a beautifully ordered affair, with neat and perfectly aligned handwriting that discussed the mundane of everyday life.

The splitting of his two inner narrators is arguably one of the core pillars of his immortal brilliance.

The art of journaling has changed many a life

It’s illustrated the unwritten of path of some of the greatest thinkers of our time, uncovering their visions and giving them the power to achieve their dreams.

Everyone, regardless of their career path, should journal. Whether it’s Branson’s hastily scrawled notebook memos, Oprah’s gratitude-filled memoirs or Kahlo’s art-strewn diaries, journaling is the reoccurring trait many successful people share.

The importance of committing your goals to paper and exploring your deepest emotions cannot be understated, especially if you’re an entrepreneur.

Given my passion for journaling and its ability to empower entrepreneurs, I’ve created a specially designed journal for innovators and entrepreneurs. It’s called the Purpose Journal, and it launched on October 6th on Kickstarter.

This journal will enable you to express your truest thoughts and realign yourself with your higher purpose. Ahead of the launch of Purpose Journal, my team and I have also developed the How to Journal for Success guide.

This guide will enable you to overcome barriers, set goals and reconnect with your purpose. Download your free copy here.