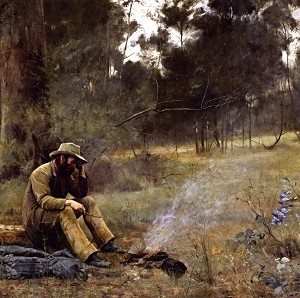 Who doesn’t love to hear that those famous words are coming to their neighbourhood?

That’s exactly what David Ludlow is planning to do with his forthcoming film, Justice in a Smoking Gun, a period-piece based during one of the most fascinating eras of Australian history.

Ludlow’s directorial credits include the feature-length Drifting and short films including The Wannabe Secret Agent, Jekyll & Hyde, and Instruments of Darkness.

Ludlow is also an accomplished actor who has appeared in many of the films he has written and/or directed, as well as Steven Spielberg’s The Pacific mini-series.

Anthill recently caught up with Ludlow to discuss how it helps to have an entrepreneurial spirit when making a film.

What’s this movie about?

Justice in a Smoking Gun is an Australian-Western set in 1868 during the Victorian gold rush. It is about an Irish settler whose family is murdered and his life is stolen from him. As one crew member put it: it’s a Charles Bronson movie across the gold rush – one bullet at a time.

Can you crowd fund a film?

Funding a film in Australia is sort of like funding a startup: it’s like stitching together a patchwork quilt. This means the funding comes from many sources from investors who understand and support the idea or, in this case, the movie. Private investors often see investing in a film to be a speculative investment, so it takes time to raise the funds.

But this film is seen to be different. It has the potential to be critical and commercial success.

“Crowd-funding sites like Kickstarter and Pozible are terrific new vehicles for independent filmmakers to raise capital to make films – but they really can only be used in conjunction with other finance,” explained Ludlow.

“For example, most Kickstarter film campaigns try to raise around $50,000. And that’s mostly for short films. Justice in a Smoking Gun is a full-length feature. We’re a low-medium budget Australian film so crowd-funding is a source that we will consider while stitching together our patchwork of funding,” he continued.

“We’ve received truly incredible support from Australia’s top screen talent. I can’t reveal all our secrets – but in terms of key crew, we’ve literally had the support of Australia’s most acclaimed film technicians who’ve worked on some of the country’s greatest films including Chopper, Romper Stomper, Animal Kingdom, Ned Kelly, The Dish, Muriel’s Wedding, Malcolm, Wolf Creek, and Australia. As an emerging filmmaker, getting that kind of support is very encouraging,” he added.

And, this being the age of the interwebs, the film even has its own Facebook page to keep supporters and investors up to date with progress.

How is being a film maker like being an entrepreneur?

Like many an entrepreneur, a film maker has particular strengths. Ludlow sees his as writing and freely admits to being hopeless at golf.

So, there are aspects of film development that come naturally and, there have been some great experiences along the way.

“With writing as my strong suit, thankfully the script got people’s attention. Then, meeting/speaking to actors and artists I admire and getting them involved in the film has also been a great experience. But, the nature of development, which is a nice way of saying ‘finding the money and getting the deals done’, is a real marathon not for the faint of heart. You just have to persist, regardless of the 1,000 “no’s” you hear along the way,” explained Ludlow.

It’s a journey that many entrepreneurs encounter on their way to finding funding and, ultimately, launching their labour of love. The right idea, the right pitch and, finding the right people to invest makes creating a film very similar to creating a startup. The one difference being, you can pivot an idea while it’s in play, you can’t do that with a film. You have to have the script and concept right from the beginning. And, it seems that Ludlow has achieved that.

Ludlow expects his marathon to end when the film hits box offices in 2015.

Want to show some support