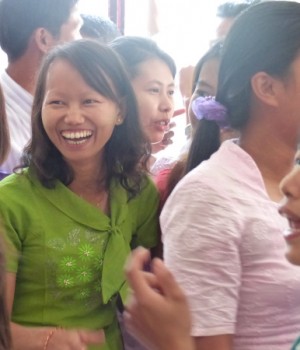 Ever since Myanmar went through reforms and opened its economic gates to the world, foreign investors and local entrepreneurs have been eager for a slice of the prosperity pie.

It seems that the University of Sydney Business School, too, would like some action in the fast-developing Southeast Asian nation.

The university has developed a unique business education program with a number of local organisations. The program is catered to some of Myanmar’s poorest people, including many thousands of women.

Over the next two years, the program, which will provide over nine thousand people across Myanmar with grassroots entrepreneurship skills, will be delivered by the Enterprise Development Network Asia or EDNA Myanmar. The organisation supports entrepreneurship education and engagement with local institutions.

The two million dollar program will be funded by donor supported LIFT* Myanmar and has the backing of the national government.

EDNA Myanmar, which was launched today, will have a staff of around 60 local employees and operate from a headquarters in Yangon’s Sanchaung Township and maintain offices in the towns of Htauk Kyant, Pyarpone and Bogalay.

Under the program, EDNA will run ten-month courses developed specifically for Myanmar’s grassroots entrepreneurs by the University of Sydney Business School and its local partners.

“By teaching in the local language and by using relevant stories, these courses will empower mainly women participants to grow their own sustainable enterprises and to teach others to do the same,” said Dr Richard Seymour, Program Director of the Business School’s Entrepreneurship and Innovation Research Group.

“For example, our lesson on understanding customer needs begins with a familiar story about a woman who sells jackfruit from a tree in her garden,” Dr Seymour said. By focusing developing participants’ abilities to question and reflect, the courses will cover business content such as strategy, marketing and finance.”

Once the courses are completed, EDNA Myanmar will provide ongoing support via online and offline communications networks and a flow of business information on topics such as markets, pricing and customer preferences.

EDNA Myanmar will operate as an independent body, while working closely with the University of Sydney Business School. The university will study the impact of the program and seek to further refine and develop the program.

Dr Seymour is hopeful about the potential positive impact that this initiative could bring, not just in Myanmar, but also around the region. “This is a very exciting project and one that could be easily adapted to benefit many millions of poor people across Asia,” he concluded.

*The Livelihoods and Food Security Trust Fund (LIFT) is a multi-donor fund established in Myanmar in 2009 to improve the food and livelihood security of the poor and vulnerable in Myanmar. Current donors are Australia, Denmark, the European Union, France, Ireland, the Netherlands, New Zealand, Sweden, Switzerland, the United Kingdom and the United States of America. The donors contracted UNOPS as the Fund Manager to administer the funds and provide monitoring and oversight for LIFT.