Co-working is changing how we work. Will it work for your startup? -
Thursday, September 23, 2021 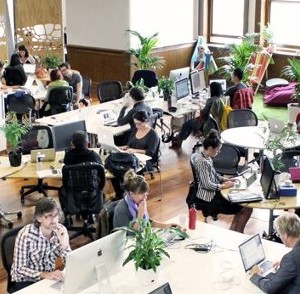 You know that feeling you get when you’re excited to go to work in a cool space with passionate people you consider your friends. You share good coffee with new interesting people with whom you have great conversations, get some help with a gnarly problem you’ve been grappling with for a week. While making a sandwich for lunch in the fully-fitted out kitchen, you agree to collaborate with a neighbouring consultant on a joint business proposal. At the end of the day you share a beer with 20 people while one of your mates spontaneously gives a quick overview on how to use Google Adwords.

No? Me neither, until recently.

Thanks to the teams from Hub Melbourne, Inspire9 and Deskwanted I joined the inaugural Australian coworking conference at the start of the month. hese guys are out to change not only where we work but how we work, one workplace at a time. They don’t want you to just like your work, they want you to love doing what you do, where you do and who you do it with – every day.

So what is co-working?

It’s a community of largely independent workers who share a workspace with you. But that’s just where the sharing starts. Unlike many workplaces where it can be competitive, frustrating and sometimes outright toxic, co-working communities foster a culture of co-operation and sharing.

In what has been described as one of the biggest structural changes to the labour market in a decade, economic layoff’s combined with a younger generation that have no intention of slaving themselves to one company, it’s leading to an ever-growing number of independent workers.

Even the Commonwealth government has set a target for teleworking, aiming for 12% of the workforce by 2020. But while there are an increasing number of independent workers, humans are still in essence social creatures.

That’s where co-working comes in.

Providing more than just a reason to get out of your pyjamas, co-workers say that the focus and the encouraging collaborative environment helps them to be more productive and creative and helps them build their business.

Peter Williams from Deloitte’s Centre for the Edge summed it up best saying, “It’s the serendipitous chance encounters between diverse, passionate people where we see amazing things happening.”

And it appears that the trend is growing quickly and globally. In the soon to be updated annual coworking survey, Anna Cashman from Deskwanted said that there are now nearly 2,500 co-working spaces globally, up 83% from a year ago. In Australia there are already 62 co-working spaces around the country.

With the vibe and typically lower costs than a traditional office, it’s no surprise that co-working spaces attract startups.

In Melbourne, York Butter Factory has its own in-house venture capital firm. Fishburners runs over a 4-floor building in Sydney and is a hotbed of tech startups. It’s home to 115 businesses.

Because co-working is as much a way of working as a space in which to work, it’s also attracting the interests of big business too.

Big business is trying to figure out how to bottle up the passion, commitment and creative output of the people in co-working spaces. Companies have been known to parachute in employees and HR manager’s to figure out how they might be able to re-create this vibe in their own spaces. With most employees preferring to work within 20 minutes of home, open-minded business too are using decentralised co-working spaces around the city as a solution to the daily traffic grind.

Showing that property owners are taking the space-changing trend seriously too, Lino Caccavo from AMP Capital called co-working a dynamic response to social employment trends and confirmed that they are talking to businesses and property owners alike about how to capture the vibe.

But don’t be fooled, while traditional serviced office provider, Regus, are updating their websites to include the word “co-working”, it’s the community that these spaces foster that makes the difference.

So, if you’re a startup or sole trader looking for like minded people or, working in a larger business and looking for inspiration, check out the vibe in a few spaces near you. A directory of co-working spaces is available at Deskwanted. But, you might not want to tell the boss – I guarantee you once you feel the buzz you wont want to go back to your cubicle farm!

Remco Marcelis is likely to be found at a co-working space near you. He is a seasoned entrepreneurial leader and occasional writer on topics as diverse as mobile trends, climate change, and social enterprise.