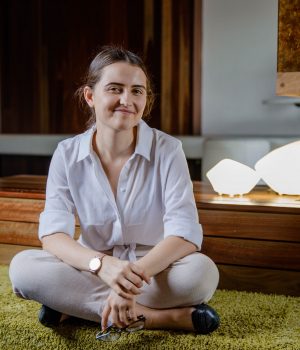 Brisbane-based Agrifood tech investment group Mandalay Ventures took out the entire second investment round, which will now allow Monty to enter full-scale production of its product, with plans to distribute to customers by the end of the year.

The Monty uses sensors to track and analyse the health of an organic waste bin measuring datapoints including temperature, moisture content and volatile organics.

The rechargeable device sends real-time data to a custom-built smartphone app, informing users if the levels are off and the simple things they can do optimise their compost health.

Founder Ashley Baxter came up with the idea for the smart monitoring probe while she was in her final year of university.

“Composting is incredibly simple and its impact is significant,” she said.

“It literally sequesters carbon emissions from the atmosphere and absorbs it into the ground. This, combined with the food waste we put into the bin, restores the health of soil.”

Monty Compost Co received pre-seed funding from angel investment company ACAC Innovation and other parties in May of 2020. The funding allowed Ms Baxter and her team to develop a beta version of its probe, which was released for testing in September.

“Imagine putting your phone into a pile of festering, 80-degree rubbish,” she said. “That’s essentially what we did with Monty.”

Ms Baxter said the real-world testing of the prototype had been invaluable and enabled the company to go to the next level.

The Monty Compost Co team spent the past nine months making improvements to the device, with the probe now ready for mass production.

“What we’re doing is something completely different to how compost is currently thought about,” Ms Baxter said.

“There’s three billion tonnes of organic waste rotting in landfills, spewing out emissions. We have almost eight billion people that we need to feed and a planet that is warming by the day. We have a solution in front of us and that is compost.”

“Being green and doing business are the way of the future. That is why we have invested in Monty – real, practical answers to the challenges of carbon emissions and climate change” he said.

“Providing individual solutions to global problems – Monty means you and I can recycle our food and garden waste at home. Not just saving the environment, but reducing the cost of waste processing and disposal to all of us.”

“We’re thrilled to welcome another incredible Aussie agrifood tech startup to our portfolio, and to support Ashley and the team along this exciting journey.”

Organic waste such as food scraps, paper and tissues is responsible for three per cent of global greenhouse gas emissions.

Ms Baxter said if even a fraction of the global population started composting, it would significantly reverse the effects of global warming.

“We would love to see a Monty being used in every household and business compost bin in the world,” she said.

“Today that dream is one step closer to being realised.”

Mandalay Ventures is a specialist, early-stage, agrifood technology venture capital firm based in Brisbane. Mandalay is the sub-investment manager of the Australian Food and Farming Fund. For further information please visit www.mandalay.vc