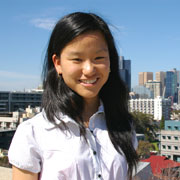 Anthill 30under30 winner Marita Cheng will be busting some serious moves next Tuesday when she will attempt, along with fellow members of Robogals, to beat the Guiness World Record for ‘robot-dancing’.

While the record currently stands at 276, Robogals (a student group that was initially created by University of Melbourne students to encourage the entry of women into science, engineering and technology careers) has already attracted over 400 confirmed registrations on Facebook.

What’s robot dancing? According to Wikipedia:

The robot (or mannequin) is an illusionary dance style – often confused with popping – that attempts to imitate a dancing robot or mannequin. It was originated by Charles Washington, also known as “Charles Robot” in the late 1960s, and gained further fame after The Jacksons performed the dance when they performed Dancing Machine

Of course, participation is not restricted to women in science only. So, if you are footloose and fancy free this Tuesday, September 29 from 12pm, you can register online to help the Robogals team dance into the record books.