In the sixth post in this series, Nigel Malone shares the contents of another of his favourite business keynote slides, drawn from a cross-section of sources that includes some of the great business, brand and military planners of all time.
Also in this series: 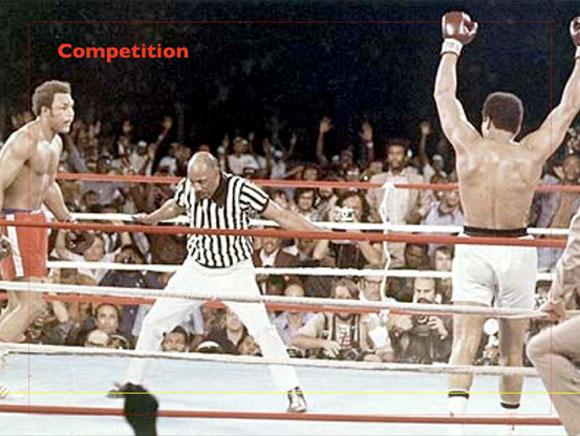 In some organisations, keeping an eye on the competition is a daily event. But it is surprising how many startups and even established brands act like they operate in a vacuum.

I have several slides on competitive behaviour and positioning that I discuss with my clients. However, on occasion, I start with a story about one of the greatest examples of strategic planning and execution ever displayed — in terms of outwitting the competition.

Aside from the battlefield, there is no more competitive environment than the sporting field. And of those fields, the boxing ring is the one where the consequences of a winning or losing strategy are most harshly felt.

In 1967, Muhammad Ali had been suspended from boxing for three-and-a-half years for his refusal to enter the army. After two comeback fights, he took on Joe Frazier for the heavyweight championship and was beaten, resigning him to lowly contender fights for several years before he would get another shot at the title.

George Foreman, on the other hand, was on the rise, having won a gold medal at the 1968 Olympics and then seizing the championship from Frazier in grand fashion. When boxing promoter Don King finally brought the two together in 1974 in Zaire — in what became known as the “Rumble in the Jungle’ — George Foreman’s raw power, greater height and reach made him the overwhelming favourite against the aging Muhammad Ali.

Ali started the fight with an unexpected strategy. He began attacking Foreman by leading with right hand. ‘Leading with the right’ was considered a rookie error due to the fact it left the fighter unprotected. At the same time it was a tactic that Foreman would never have considered or prepared for, and he suffered several solid hits in this fashion from Ali. They weren’t knock–outs, but it embarrassed and unsettled Foreman. His ego dented, Foreman mounted an aggressive, high–energy counter-attack, which played straight into the hands of Ali’s strategy.

Ali was famed for his speed and ability to ‘dance’ around his opponents in the ring. Foreman, on the other hand, was a massive fighter with tremendous punching power, but less mobile. Foreman was ready for Ali’s ‘dancing’. He had trained long and hard to cut him off in the ring, so he could easily finish him with his powerful punches. Ali had other plans.

Instead of ‘dancing’ as everyone expected, Ali immediately started leaning on the ropes and letting Foreman attack him, but constantly clinching and grappling with Foreman to deflect and diffuse his punches. All the while Ali verbally taunted Foreman, inviting him to hit him harder and faster. An enraged Foreman did exactly that. Ali continued this tactic round after round, sticking to the ropes and absorbing Foreman’s punches, conserving his own energy, while Foreman rapidly burnt his. By the eighth round, Foreman was exhausted and Ali easily dispatched him to the canvas. Ali’s now famous ‘rope–a–dope’ strategy entered into legend.

I’m not a fan of fighting, but am a huge fan of Ali’s strategic planning. Against all the odds and a younger, stronger Foreman, he won the World Heavyweight Championship simply by out–thinking the competition. That, for me, is why he was the ‘greatest’.

For business, the analogy is simple. An underdog, startup or new entrant to the market must study their competitor’s every move. Don’t imagine they won’t retaliate to your advances, but as Ali showed, if you are ready, you can flip it into a huge advantage. Equally, from a marketer’s perspective, doing the completely ‘unexpected’, as Ali did, can pack a tremendous punch.

Nigel Malone is a freelance brand strategist and writer, with particular expertise in the fields of tourism, finance, technology, sustainability and social change. Connect with him on Linkedin http://au.linkedin.com/in/nigelmalone