In the third post in this series, Nigel Malone shares the contents of another of his favourite business keynote slides, drawn from a cross-section of sources that includes some of the great business, brand and military planners of all time. 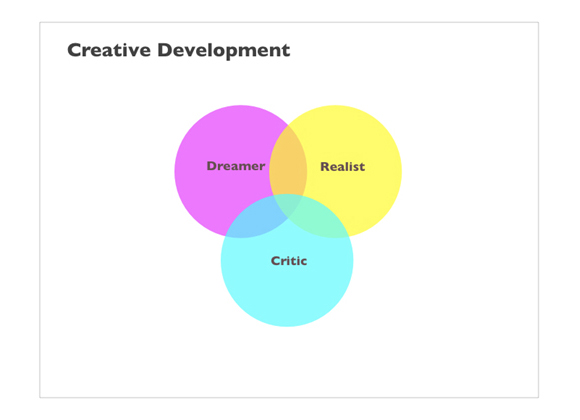 It’s hard to imagine how all those amazing Disney films, not to mention the theme parks, were the brain–child of a single man. How could a single person be responsible for all of that? Well the truth is there wasn’t just one Walt Disney. There were three.

“There were actually three different Walts: the dreamer, the realist, and the spoiler. You never knew which one was coming into your meeting.”
— Disney Animator

Walt Disney’s simple, yet incredibly successful, strategy for creative development was founded on an ability to assume three different roles — dreamer, realist and critic — each of which involved a particular type of thinking and action.

Disney the Dreamer could visualise extraordinary scenarios, for new business projects as well as animated films. In Dreamer mode, Disney had the ability to immerse himself in his imagination, to the exclusion of everything else.

“What I see way off is too nebulous to describe. But it looks big and glittering. That’s what I like about this business, the certainty that there is always something bigger and more exciting just around the bend; and the uncertainty of everything else.”
— Walt Disney

Disney wasn’t just a creative thinker. He made things happen. Disney the Realist had a phenomenal ability to motivate and co-ordinate teams of diverse workers to bring his dreams to life. He brought the necessary perspiration to the Dreamer’s imagination.

“Our success was built by hard work and enthusiasm, integrity of purpose, a devotion to our medium, confidence in its future and, above all, by a steady day-by-day growth in which we all simply studied our trade and learned.”
— Walt Disney

Disney the Critic subjected every piece of work to rigorous scrutiny.

“Every foot of rough animation was projected on the screen for analysis, and every foot was drawn and redrawn until we could say, ‘This is the best we can do.’ We had become perfectionists…”
— Walt Disney

The key point here for entrepreneurs, inventors, innovators and anyone in the business of being creative is that it’s not just about the roles themselves — it’s when to play them or, more importantly, when not to play them.

Many a great creative (dreamer) has had his or her ideas shot down before they had a chance to fly by allowing the critic to enter the room/mind too early.

Equally as frustrating is the dreamer who doesn’t know when to call in the realist and ends up with a lot of unrealised ideas.

As Robert B. Dilts describes in Strategies of Genius: Volume 1, creativity as a total process involves the coordination of these three sub-processes. Striking the right balance between dreamer, realist and critic was Disney’s real skill.

Dilts goes on to recommend to anyone wanting to adopt Disney’s creative strategy that they set up three physically separate areas or rooms — one for each role — and initially spend some time in each room, getting the feel for that particular role. That is, spend time in the Dreamer Room and become used to how it feels to dream up creative ideas so you can recall that feeling each time you’re in that room or playing that role, in effect strengthening the character and integrity of that role. Repeat this process for the Realist and Critic Room.

In reality, it is not necessary to have three real rooms. Just be able to isolate the type of thinking associated with that role.

Lastly, remember it’s not a linear process. Rather, it is iterative and cyclical, as you should aim to consult each role independently and continually, ever-enhancing the idea until the critic finally becomes silent and you have arrived at the perfect idea.