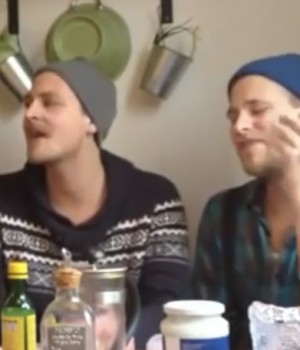 Do you see what I did there? I got you to click through to this article.

How?
Hopefully, you’ll have found that the headline is compelling. The goal was to create a headline that hit on a problem you’re trying to solve: increasing click through rates. Plus, the Swedish fishermen probably made you think, ‘what they heck?’

Interest and intrigue — these are core elements of a good headline.

Sometimes, a good headline can be slightly left-field. Sometimes, it’s not strictly accurate.

For example, a headline that’s not strictly accurate has helped make this video gain viral traction.

The headline in YouTube is: Three Swedish Fisherman (sic) sing Seal’s Kiss from a Rose.

They are indeed fishermen but, they are also part of a Swedish vocal group Solala.

They are fishermen, so the headline is not false. They just happen to also be professional singers. And, maybe after this cracking rendition of the song, singing may become more of an income earner than fishing.

But, the lesson remains. It’s the slightly left field headline for their YouTube video that got the click throughs. Something less interesting like “Great cover of Kiss from a Rose from Swedish group Solala” would not have attracted the same volume of interest, even if it is equally accurate as a headline.

So remember, in content marketing, your initial success lies in the headline. Then, of course, you have to make sure the rest of the content is equally compelling.

These three singing Swedish fishermen deliver a video that has an intriguing headline and, their version of the song is great.

It’s a solid lesson in good content marketing. Plus, you’ll have the song stuck in your head for the rest of the day. You can thank me for that later.