How Juliet Rosser is revolutionising art with her gallery, Platform72
Friday, February 26, 2021 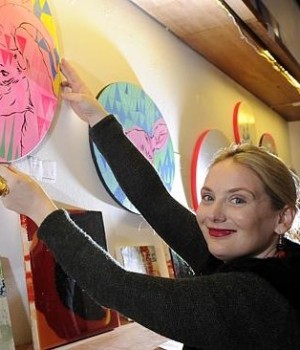 Juliet Rosser was a self-described “terrible employee” in her past career. However, after making the life-changing decision to work for herself, she has found great success as director of her arts business, Platform72.

Launched in February 2012, Platform72 is a hybrid art gallery and retail store housing an eclectic mix of Australian artworks and designer homewares, jewelry and accessories.

It is designed to showcase contemporary Australian artists and support them by giving them exposure to a wide audience that they might otherwise be unable to reach.

The gallery hosts regular exhibitions once or twice a month which are open to the public and artists range from emerging stars to Archibald winning artists such as Craig Ruddy.

The first space, located at 72 Oxford Street in Darlinghurst, Sydney was followed by a second gallery in Central Park, Broadway in October 2013. And this July, Rosser is opening her third space – a showroom in St Leonard’s which will be open by appointment only.

Artworks are also sold online at Platform72’s website and can be shipped across Australia.

What is the motivation behind Platform72?

“We believe that life is better with art,” said Rosser. “Our aim is to try and break down the barriers between artists and the general public, providing a dynamic retail and gallery space for artists to show their work and for anyone to purchase an artwork at surprisingly affordable price points.”

“Coming from an art school background myself, I know how much fantastic work gets made and then ultimately sits in a bedroom with nowhere to go. I also know that artists aren’t greedy and the inflated prices of art are always from a different perspective (motivated by profit), whereas artists are motivated by a purer need to create,” she remarked.

“Art is sometimes seen as a world that is closed off to those without a deep knowledge of the history and theory and equally deep pockets! This is the misconception that we’re working to change,” Rosser added.

And on that note, one of the ways through which Platform72 is working to improve the process of purchasing art is by offering an in-home consultation service.

“The idea is that a potential customer can hop on to the site, make a wish list of works they’re interested in and we’ll come to their home to show them the pieces in-situ.”

“Someone might love a piece of art in an exhibition space but it might not work with their home. We charge a small fee for this service based upon their location which is refunded if the person makes a single purchase,” she explained.

How has Juliet Rosser managed to succeed with Platform72?

Rosser has extensive experience in business under her belt. She started out working in sales and marketing for a range of companies including The Sebel Sydney, Blueprint Digital and the iconic Fort Denison Restaurant.

In 2011, Rosser came across a retail model which involved renting out space to artists, without taking commission on any sales. The execution of this particular model was wrong but the concept was a perfect starting point and Rosser set to work putting it into action – thus, Platform72 became a reality.

Sometimes, all you need is the light bulb to light up above your head…

Rosser has knowledge in the arts with a Master of Studio Art from Sydney University. Furthermore, members of her team have similar qualifications in the arts too.

According to Rosser, “This sets us apart from many other galleries in that we understand art from an artist’s perspective. We know what goes into their work and we always aim to educate the customer.”