Which advertising medium – print or social media – provides more reach and more bang for your buck. It’s a complicated equation. Luke Faccini takes a peek under the hood.

Before diving into this contentious subject, let me say upfront that print advertising in some cases can be very profitable. As with any marketing piece, when you include a tracking method, such as a 1300 number or a unique URL, you can easily measure the number of conversions gained through it. Then simply multiply the results by your average lifetime client spend and you will clearly see just how profitable it is. If it is profitable, continue to do it until it ceases to be.

The main point of this post is not to argue the profitability of print advertising, rather to compare the returns that can be gained from investing the same amount of capital in the rapidly growing social media marketplace.

To demonstrate this I have created a direct comparison using the two media to target the same audience. The comparison has been generalised to keep it simple enough to make it easily relatable to most target markets. The following target audience has been selected by age and gender. This allows the selection of an appropriate print publication as well as enabling targeting through social media. Our audience is men and women aged 25-49, and we are assuming a non-gender specific general product or service such as fitness, or health insurance.

The Good Weekend (TGW), an Australian national weekend magazine, which is inserted into both The Sydney Morning Herald and The Age, has a national readership of 1,740,000. According to Roy Morgan Research, March 09, the bulk of this audience are in NSW and VIC and 726,000 are our target demographic.

You are able to download the current rate card from Fairfax Media to confirm the pricing for casual advertisement space in TGW, some of which are:

Rather than fight for attention within a shared page and bypassing the excess of a Double Page Spread, we have chosen a Full Page. Add to this agency fees for creative, artwork and photography. Naturally, these fees vary with choice of agency, photographer and model. For the purpose of this comparison, add $10,000.

Furthermore, to quantify direct response generated by an advertisement will usually require an additional system to be put in place. Typically, this could be a new website (microsite or landing page) specifically designed to complete the enquiry, sale or redemption. Similarly, a unique toll free number can be set up and staffed. These systems require some additional investment of either capital or staff time.

As this is a one off piece, it needs to be just right – there is no room for error. However, there are a number of variables that may influence the advertisement, some of which are inherently uncontrollable, such as:

Taking the subjective figure of 0.1 percent (for both media) as an expected response rate, we can estimate from the 726,000 TGW readers fitting our target group, we will get 726 responses, each costing at least $71.58. Whether these convert depends entirely on our conversion system and is irrelevant to this comparison. 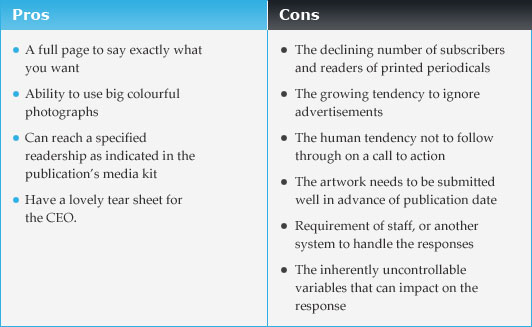 The advice most often given for print advertising is that frequent repeat exposure is essential to the success of a campaign. This means that many more than just this one advertisement is required for success, and a much bigger budget, but we did want to keep it on or around $50,000!

Facebook and Twitter are our selected social media channels, although just like print there are many to choose from. The major difference is that with a similar budget we are not talking about a one off advertisement, we are talking about a sustained and continuous social media campaign. This means that we need to create an effective strategy first, then develop and put into place a social media policy, then and only then implement and manage the campaign.

With social media being a channel for conversations, the direct response mechanism is largely inbuilt, however there are instances where a specifically designed website or landing page system may assist with conversion. We won’t delve into conversion – apart from saying there are the similar variables that will each influence response rates – but a sustained online campaign provides the opportunity to see immediate, quantifiable results and make any necessary adjustments real time.

For a budget of less than the $52,000+ for the single print advertisement, you can create, develop and manage (with personnel) a social media campaign, including advertising spend on Facebook for 12 months.

Twitter does not provide an advertising model as yet, however some of its many business uses are:

Facebook provides a comprehensive advertising model and a fan page structure. You can read more about Facebook for business in Using Facebook to market your business and talking point, featuring a business launched solely on Facebook.

The Facebook advertisement builder allows us to target specific age groups, locations and loads of other things, including words and phrases that people have in their profiles. Using this tool we identify 3,187,580 male and female users aged 25-49 in Australia. Selecting just the two major cities of Melbourne and Sydney, acknowledged as the bulk of TGW readers, we can directly target 1,507,620 Facebook users with our advertisements. Cost of advertisements can be either Pay for Impressions (CPM) or Pay for Clicks (CPC). For this target group, Facebook is recommending a minimum of $0.58 per click.

Using the same subjective figure of 0.1% as an expected response rate, we can estimate that from the 1,507,620 Facebook users fitting our target group we will get approx 1,507 responses, each costing at the most $34.50. That’s if we stop at the first count. Remember, this campaign is running every day for 365 days and includes staff to converse with the respondents amongst numerous other facets. For details, follow the two links above. Whether these convert depends entirely on our conversion system and is irrelevant to this comparison. 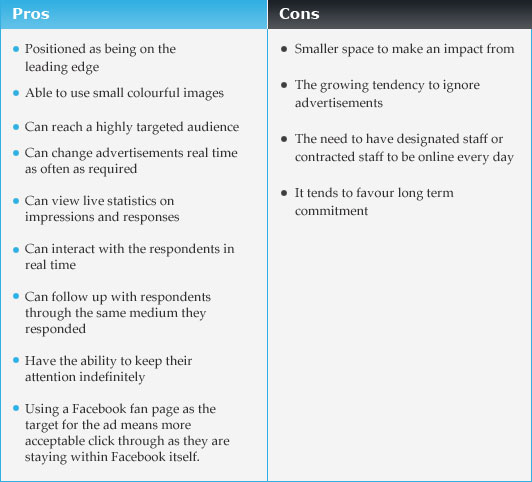 For a longer and more sustained campaign, with the same if not more niche targeting capability and for the same budget, social media is the clear winner. Not to say that it needs to be one or the other, the two can work nicely together.

As I said in the beginning, if print is profitable, keep doing it. You may just want to try social media to see how profitable it can be for you, too.

Luke Faccini is Director of Creativity at The Sponge, a Sydney-based company specialising in the development of multimedia branding solutions. The Sponge recently launched the online branding services www.brandpulsecheck.com and www.thinksocial.com.au.