Human beings are extremely sophisticated animals. But are we really that different from our tree-dwelling primate ancestors? With the global economy biting and organisations scrutinising their structures for inefficiencies, it’s worth considering the impact our biology has on leadership dynamics.

Jane Goodall rose to global prominence through her landmark study of chimpanzees in Tanzania, beginning in 1960. Her work soon became the foundation of primatological research and redefined the relationship between humans and animals. As she reveals, the parallels between chimps and humans at work are striking.

Chimpanzees are so like us in their biology and the way that they behave. So it shouldn’t really surprise us that chimpanzees are capable of intellectual performances once thought unique to us.

Chimpanzee males are characterised by a perennial need to assert themselves in a hierarchy – some much more than others.

The male chimpanzee rises in rank very much in relation to the impressiveness of his male dominance display. And in this display the male, with his lips bunched in a furious scowl, charges across the ground slapping with his hands, stomping with his feet, maybe hurling rocks or tree branches and leaping up the vegetation. He’s making himself look as big and dangerous as he possibly can and, in this way, he can very often intimidate a rival without having to risk physical attack.

To be a real top-ranking Alpha male, you must be able to be dominant in any situation, even if two males gang up on you. To form close relationships, males spend a lot of time grooming each other. That really is a good way to form an alliance.

We all, including chimpanzees, are a mixture of what we’ve inherited and what we learn. When we look back over the years, it’s very clear that the male offspring of the good mothers tend to grow up being assertive and very self-confident. They tend to reach a high rank and play an important role in the reproductive life of their community. And it’s the same for females, actually. They tend to be more successfully productive if they have a good mother.

We’ve seen examples of something similar to warfare were the males of the larger communities systematically annihilate the males of a neighbouring community, one by one, leaving them to die of their wounds. So chimpanzees, like us, have a dark side to their nature, but they’re also capable of behaviour that seem precursors to love, compassion and altruism.

This is a condensed and edited extract from a speech Dr Goodall gave on 9th October, 2008 to a Melbourne luncheon audience as part of the Australian Graduate School of Management’s Executive Program. Thanks to the Jane Goodall Institute for photographic access. To donate to the not-for-profit institute, visit www.janegoodall.org.au. 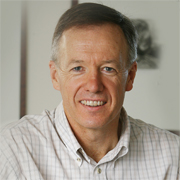 Andrew O’Keefe, a best selling author (The Boss) and respected human resources consultant, counsels organisations to improve their leadership hierarchies by paying closer attention to human instinct. Picking up where Dr Jane Goodall leaves off, he traces the evolution of humans from primitive society to corporate denizens.

Organisational life is harder than it needs to be. We make it harder because, generally, our leadership practices ignore human instincts.

The use of instincts helps us to overcome common derailers. Suddenly we can have a fresh perspective. It allows us to design systems, which are natural for managers or leaders in organisations to use and, of course, it equips us to make intelligent leadership choices.

We’re a social animal. Hierarchy in complex social groups provides a way for the group to function. Given where we have come from, we are hard wired to have closely knit family bonds with a small group of other people – five to ten individuals. It’s not surprising, then, when we changed our habitat 250 years ago, we developed organisations as we know them today. The building blocks of our organisations are teams of around five to ten individuals.

We would find 100,000 years ago that humans would have this organisational capability, which in part became used for social chit-chat, otherwise known as gossip. It’s a way of social grooming, similar to the chimps with their physical grooming. It might be handy to know there are two reasons why we gossip. One is quite clear: it’s a really handy way to gather useful information. And secondly, it’s a way we form and maintain alliances – the equivalent of physical grooming of chimpanzees.

We’re hardwired to not suspend judgement. We do not stay in a neutral state. If we’re not yet able to classify, we assume the worst. And something that affects our family strikes at our strongest needs.

The rhetorical question is, given that our habitat changed only 250 years ago, has our hard wiring changed? The answer is no.

This is a condensed and edited extract from a speech Andrew O’Keeffe gave on 9th October, 2008 to a Melbourne luncheon audience as part of the Australian Graduate School of Management’s Executive Program. www.hardwiredhumans.com 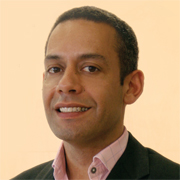 The Australian employment market is undergoing profound disruption thanks to the wave of Aussie expats returning home, away from more severe economic turmoil in the US and UK. Nat Cagilaba explains the potential impact of this HR tsunami.

In the global economic downturn, the Australian appeared to be holding up better than the UK and American economies. The pinch is really starting to take effect in the UK and more Australian expats are returning home.

There are still jobs in Australia, but many organisations in financial services sector have adopted head-count freezes. As businesses, they’re all looking at what they need to do to ride out the current economic storm. And so, while a number of employers would like to take these people on, they actually can’t because they don’t have any capacity.

In Australia, a lot of people are staying with their jobs. It’s almost ‘better the devil you know’ and fear of ‘last man in, first man out’ if something does happen. While things are very unstable and we’re unsure of what the future holds, it’s better to stay where you are.

The Australian market had a brain drain – people with key skills heading overseas – especially to the UK and the United States. Now that they are returning, quite artificially, and the jobs aren’t here for them, where are they going to go? It’s likely that they will be forced to look for jobs beyond their traditional field of expertise.

There is the need for improved communication in organisations. In unsettled times, if you don’t actually tell people what’s going on, then they make up their own minds. Don’t be under any illusions – water-cooler gossip can have a detrimental impact on your business. If information isn’t managed effectively through both your internal and external communications, people will jump ship. It’s about controlling and managing the information flow and really having that open dialogue with your employees through difficult times. It fosters loyalty and helps individuals make up their own minds on whether to stay or go.

Nat Cagilaba is the Director of Daemon Within, part of the international Daemon Group, which specialises in business to employee communications, marketing, branding, PR, research and digital communications.