School's out for summer - not! Google and General Assembly announce online summer school for aspiring entrepreneurs -
Saturday, May 15, 2021 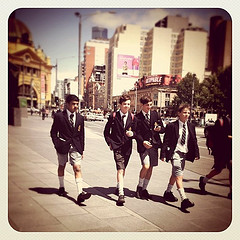 Ah, summertime – the perfect time for some schooling, especially if you’re trying to squeeze some learning in between university semesters.

A new online summer school developed by General Assembly and Google Australia aims to help aspiring entrepreneurs get started. The free eight-week course, open to all Australians, will give participants practical knowledge in turning a business idea into a technology startup.

Introduction to Startup Entrepreneurship is an 8-week summer school that will cover how to develop an idea, design and branding, working with developers and marketing for startups. The online summer school will also run weekly Google+ Hangouts to allow face-to-face interaction with course instructors.

At the launch event, Minister of Communications Malcolm Turnbull said, “This is a great initiative for the typically quiet month of January for thousands of Australians to learn how to become entrepreneurs. In not too many years from now, I expect we will see some successful innovators who have benefited from this course.”

The need for fresh faces in tech

Alan Noble, Engineering Director for Google Australia, added, “Tech startups could contribute $109 billion of GDP and add half a million jobs by 2033, but to unlock this potential we need more young Australians having a go. Rather than pursuing summer internships in more traditional fields, we hope to more Aussies will consider the tech sector after taking part in this online summer school.”

Riley Batchelor, Australian Director of General Assembly, said, “The Australian tech startup community is in a really exciting phase of growth. This project has given us the opportunity to give budding entrepreneurs around Australia and the world access to the tools and techniques that they need to launch their startup idea.”

Ten participants who complete the summer school will be chosen by General Assembly for a two-day Google Bootcamp in late March, where they’ll receive hands-on learning sessions and mentoring.

Introduction to Startup Entrepreneurship will be begin on January 6, 2014. Participants can enrol now over at the official website.