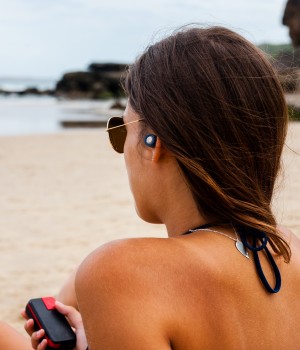 Know that awkward moment when you’re running to the beat of the music, and then it suddenly stops? Yes, the earphones just fell out of your ears, disrupting your groove.

A 21 year old entrepreneur Jonathan Zuvela decided that enough was enough, and so developed Nextear, whose slogan reads “ the world’s smartest wireless earphones”.

With prototypes done and a Chinese manufacturer sourced, Zuvela’s goal was to raise USD 20,000 on Indiegogo to manufacture the first batch of the products. And since everyone wants smart wireless earphones to come true, the entrepreneur has already raised more than USD 100,000 at the time of writing.

With early-bird orders flooding in and pre-orders of the product retailing at just USD 99, it seems demand is strong and the product could well become the next must-have technology item.

Whilst the ultra small earphones, which pair with any Bluetooth smart device to play studio quality music are definitely the drawcard, the device also comes with a multi-purpose rechargeable storage case which can charge any iPhone, tablet or Android, a 16GB flash memory, a built-in USB port, a key-hook, a LED light torch, and the ability to stream sound from your computer or TV with little to no latency.

Zuvela has also planned a RADAR function which helps users find the two ear pieces to place them safely back in their case if misplaced.

Zuvela says when designing NEXTEAR he wanted every user to feel the freedom and calmness that listening to music brings into our everyday lives.

“If you want to have music wherever you go – whether it is on your morning run, on the train or sitting in your room streaming TV, and you are seeking quality sound with the deepest bass notes and the crispest highs NEXTEAR will impress you!” says Zuvela who heralds from Lithgow, NSW.

The young entrepreneur graduated from high school in 2007, studied Mechanical Design and Engineering and later Computer 3D Design and Stress Testing, before working through the ranks and becoming a senior manager at 21. Nextear is the first product to be launched by his maiden company, Future Services, in October 2015.