Influenza sucks.Why businesses need to be flu smart, this year in particular -
Friday, May 7, 2021 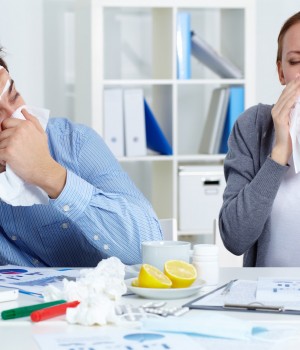 First, the story of an Anthillian down.

Recently, the flu got me down.

I’d never had influenza before, so the experience was really new for me. If you’ve had the flu in the past, you may have forgotten what it was like. Please allow me to remind you of the importance in getting your flu shot – which I had not, when the dreaded “bug” decided to bite me.

At first, I thought I was simply feeling a little bit “under the weather,” as is often said of someone feeling not-so-good. Within a couple of days, though, I came to realise that something was way wrong.

I started to feel very tired; very, very tired.  My limbs felt exponentially heavier than they actually are, as though they were wrapped in thick towels, submerged in water three-metres deep. I couldn’t have gotten out of bed if I’d wanted to; I didn’t want to do anything but sleep for days.

The flu was the worst experience I’d ever had, or so I thought. The actual worst was what happened after the flu had done its dirty work. As is often the case, I came down with pneumonia, due largely to my weakened state, thanks to influenza. That was a bad experience. It took a month for me to fully recover from both ailments. Had I gotten my flu shot, it all might have been avoided.

So, consider me the official Anthill Influenza Ambassador (a title I bear like a badge of honour, I guess), asking you to read the following article from Influenza Specialist Group. And, contrary to common belief, influenza is not just a lousy head cold, it is so much worse.

What the experts say about this flu season

With nearly half of the United States is reporting widespread influenza activity, most of it attributed to the H1N1 virus that caused a worldwide pandemic in 2009 – it will be important to monitor this for the Australian winter.

Research suggests that organisations lose on average $385 per day/employee1 in lost productivity when a staff member is away sick and that 90 per cent of Australians have gone to work with flu symptoms such as feeling cold, having a cough, muscle aches and fever.

During the flu season employees can be sick for more than a week, having ramifications for businesses. The Influenza Specialist Group urges Australian businesses to promote flu awareness to their employees in the lead up to flu season and consider offering flu vaccinations to staff members, which could save an organisation substantially in lost productivity. Vaccination during March or April is wise, prior to outbreaks beginning.

Influenza can easily spread throughout the workplace. Employees with the flu may not be aware they are infecting others around them as people can be contagious one day before getting significant symptoms (and up to five days after becoming ill). A person doesn’t have to be near someone infected by the flu to be at risk.

Airborne particles can land on a hard surface where the flu virus can survive for several hours, which means people can pick up contaminated respiratory secretions even without someone coughing or sneezing near them. Touching contaminated surfaces (including hands) and then touching your mouth, nose or eyes can lead to infection.

People can minimise the spread of the virus during the influenza season by practising good flu etiquette, which includes good general and personal hygiene, avoiding close contact with others (at least one metre apart) and covering your mouth and nose (with the inside of your elbow) when coughing or sneezing.

It is important for people to be immunised annually as the vaccine usually changes slightly each year because the influenza virus is subject to change; and this is the case for the 2014 vaccine, which is different from 2013. In addition, during the course of a year a person’s immunity reduces by 50 per cent or more, so regardless of the changes it’s important to keep boosting your immunity.

Some people believe that having the influenza vaccination can result in contracting the flu, which is a myth. The vaccine contains pieces of dead influenza virus, which can’t give you influenza. In rare cases, a person’s immune system reacts and they may feel a little off-colour and get minor symptoms during the 24 hours after the vaccine. But this is not influenza.

People at greater risk of complications from influenza (and who may be entitled to free flu vaccine) include those with heart conditions, asthma and respiratory conditions, type 1 or type 2 diabetes, kidney disease, impaired immunity and neuromuscular disorders. Pregnant women, people over the age of 65, and Aboriginal and Torres Strait Islanders are also at greater risk of complications. The Australian Immunisation Handbook also identifies Down Syndrome and obesity as additional risk factors of complication from influenza.

So, take it from someone who can attest to just how bad the flu can be, be proactive in preventing influenza. While it may seem a while off, while we bake in the January heat, influenza season is not to far away.

For more information about influenza and the influenza vaccine go to: www.flusmart.org.au or the Influenza Specialist Group’s Facebook page https://www.facebook.com/InfluenzaSpecialistGroup?ref=hl