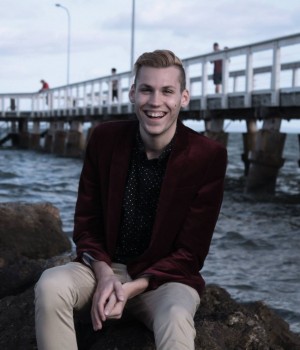 Jeremy Hansen, who is known as “that guy from the theatre”, dropped out of high school in Grade 10 to start GlowBored, a successful public relations, branding and marketing firm specialising in the entertainment industry.

The odds were stacked against Jeremy from the very beginning. Most people were understandably cautious about the idea of doing business with a lad as young as he was back in 2012, when he started out.

“Can you blame them? I was a 17-year-old managing multi-million dollar productions!” he remarked. “I had to prove them all wrong and deliver the best results possible.”

Fortunately, with a long list of satisfied clients, GlowBored now enjoys a great reputation in the public relations and communications industry.

Jeremy has worked on several remarkable projects such as The Miranda Sings Australian Tour, Underground, The Greenroom Project, The Naked Magicians, Broadway Unplugged and YOUR Theatre Co as well as with some of the top names in the Australian entertainment industry.

Jeremy revealed to Anthill that since scoring a place in last year’s 30under30s, his business is now expanding into the fashion/lifestyle industry and that he has started writing a book.

This young entrepreneur, who turned 18 just a few weeks ago, further revealed that he is also passionate about working with kids who would like to get into the public relations and communications industry, just like him.

He’s currently involved with several different projects and universities helping to mentor kids and give them real world knowledge about surviving in such a cut-throat industry.

Jeremy was named one of the Top People of the Year in 2013 by Virgin Australia and also one of the Top Entrepreneurs in the country this year by Smart Company.

I have a killer business persona! That is something that has developed over the years. Starting out in the industry, I was a happy, grinning kid just bopping along. I had to develop and learn to differentiate myself from that and to have a harsh approach and take no nonsense from people who wanted to take me for a ride just because of my age.

Use the Tweet button at the top of this page. Your tweet will
say: Congratulations Jeremy Hansen, Anthill 2014 30under30 winner!