Home Anty-Climax Ant Bytes — AA13
Facebook
Twitter
Google+
Pinterest
WhatsApp
ALMOST FAMOUS While most people, at some stage in their life, indulge in the surreptitious daydream of one day being awarded a Nobel Prize, very few make it onto that prestigious stage. For those possessing the necessary fervour to make things happen, but whose genius is a little misguided, there are the ‘Ig Nobel’ prizes. The Ig Nobels (a spoof on the Nobel Prizes presented earlier in the week) are organised by the wry people who produce the Annals of Improbable Research, for research that “cannot or should not be reproduced”.
Think of it as a bit like the Darwin Awards of science, except the recipients are capable of accepting their awards and, in most cases, are ebullient. The ceremony is held at Harvard University and attracts real Nobel laureates to present the prizes, while hundreds of students in the audience follow the somewhat batty custom of hurling paper planes onto the stage.
The standout winner for 2005 has to be Gregg A. Miller of Oak Grove, Missouri, in the field
of Medicine, for inventing “Neuticles” – artificial replacement testicles for dogs. According to Miller,
Neuticles allow your pet to retain his natural look and self esteem, and help alleviate the trauma
associated with neutering. Neuticles are available in three sizes and three degrees of firmness. And their inventor is now an Ig Nobel laureate.
*Source: www.improbable.com/ig 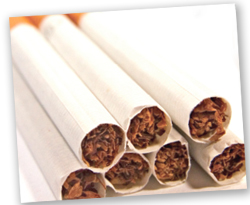 Soon, fidgety and irritable smokers will be able to ease their alcohol-induced nicotine cravings by … drinking alcohol.
Smoking bans in pubs and restaurants have become common place throughout the western world. From New York to Dublin to Berlin, smokers are being shooed out into the cold where they huddle together on the pavement breathing fire in defiant camaraderie.
German beer company, Nautilus, wants to help. Consumed by a wave of compassion for these exiles (pathos lubricated by profit potential), Nautilus is currently testing a new product called NicoShot – a nicotine-laced beer. Each bottle will contain 6.3 percent alcohol and three milligrams of nicotine.
The ideas is that smokers will be able to get their fix without having to duck outside for a quick gasper and risk missing out on the most whimsical jape of the evening or entreaties from the opposite sex.
It certainly brings all sorts of new meaning to the old saying: ‘killing two birds with one stone’.
Could NicoShot be coming soon to a pub near you?

In a sign of our online times, the Gold Coast’s new NRL team recently settled on its nickname based on the availability of an internet domain name. Management selected the Gold Coast “Titans” after URLs for the preferred “Pirates” and “Stingers” were already taken. It goes to show that a strong online presence is more important these days than the oversized character who cartwheels for your cause.

New Zealand is only the second country in the world (after the United States) to allow people to design and order their own stamps online. Images are uploaded via the internet through Wellington software firm 3months.com. NZ Post reserves the right not to print images it deems offensive, so love letters will retain their mystique … for now. The stamps are delivered by post in two to three days and cost around $20 for a book of twenty 45-cent stamps. Given the digital camera craze, could Australia be next? Stay tuned.

Scientists at the Australian Nuclear Science and Technology Organisation (ANSTO) are currently constructing a world-first industrial plant to transform liquid radioactive waste into synthetic rock. Known as Synroc, the technology traps radioactive waste inside a structure that mimics rock in nature. Synroc will be able to contain the waste for much longer than the thousands of years it takes to shed its radioactivity, meaning that water and other substances will not become contaminated. It is hoped the technology will one day rival Australia’s uranium sales as an export earner.

It had to happen, and it has. Australian company Barokes is taking huge strides into export markets with its premium wine-in-a-can technology (Vinsafe). After six years of R&D and testing, the company was born global in 2002 when it began exporting to Japan. Barokes wine-in-a-can now exports to over a dozen countries, where people can be heard cracking an Aussie tinny, sniffing, swirling, gargling, swallowing and sighing with delight. We wonder how long it will be before Australians toss aside their VBs for a W-i-t-C.