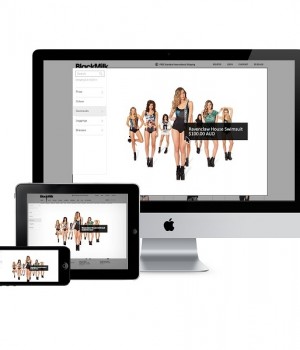 What do you think would happen if sleek technology joined hands with high fashion? I for one imagine humanoid robots pulling off a perfect mechanical catwalk in couture designs on a runway at the Paris Fashion Week.

The day geeks and fashionistas came together…

Thereitis is commercialising its patented 3D Display born of 10 years of research at Flinders University, South Australia while Black Milk Clothing is an Australian fashion label founded in Brisbane in 2009 by designer James Lillis.

Their coming together has worked so well that prior to launch; Black Milk’s Hogwarts Collection had already attracted over 25,000 unique views in less than 48 hours, with the average visitor spending 20 minutes interacting with the thereitis interactive 3D Display.

The display showcases 32 nylon pieces with leggings, dresses, swimsuits and tops all featuring intricate Harry Potter artwork. This is just the latest in a series of Black Milk Clothing collections developed in a licensing partnership with Warner Bros. The others include Star Wars, Lord of the Rings and Sesame Street.

The solution runs on desktop and mobile web browsers using HTML4, HTML5, and Flash, as well as native iOS and Android apps. It is available as either a fully hosted solution running in an iFrame or, as a custom embedded version integrated into the client’s website.

It is particularly easy to use because it requires next to no technical knowledge to implement and the look and feel of the cube is controlled using a simple Content Management System (CMS). Plus, data can be sourced from the client’s database or extracted from their website.

Thereitis overcomes the online retail challenge of displaying all or part of a product catalogue on small screens to increase shopper engagement and reduce the number of clicks to purchase. Now, shoppers can click on a tab to launch the display, filter by price, size and colour and then click on an item to see more detail by zooming, panning and spinning then ultimately click to make a purchase.

Thereitis CEO Nigel Standish said they could not have found a better scenario for showcasing their 3D display – “a massively successful, community-driven clothing icon and arguably the most famous fictional characters of our century.”

Standish also noted that the technology “mimics the real-world shopping experience where products ‘catch your eye’ even when you are not sure what you are looking for.”

Cameron Parker, Marketing and Operations Manager of Black Milk, said that Thereitis 3D Display was a good fit with the online-only brand’s culture (they have no brick and mortar stores) and social media community of over 500,000 mainly female fans worldwide.

“We like to push the edges of what’s possible online – previously we used Pinterest for previews but the highly dynamic, visual nature of Thereitis is so much better. Based on the positive feedback we’re getting from our ‘Sharkies’ (the self-styled name for Black Milk fashionistas), we plan to use Thereitis for all our future collections,” Parker said.