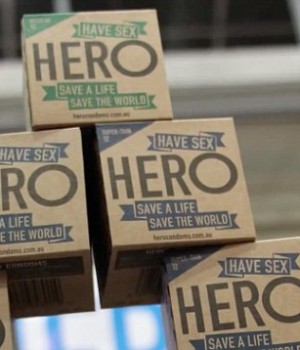 Yes, that means condoms too!

When it comes to the condom of choice for Australian women, a new survey1 has found that HERO Condoms is at the head of the pack.

HERO Condoms, which donates a condom to a developing country for every one sold in Australia and New Zealand, was named the top choice of Australian women.

The HERO of the magic hour

Conducted by market research company Pureprofile, the survey shows that HERO is the brand of choice among Australian women, with nearly 78 per cent of women preferring it over competitors. It also found that young women would be more comfortable purchasing HERO condoms than any other brand.

“Around 60 per cent of 18-24-year-olds said that either themselves or someone they knew were embarrassed or uncomfortable with purchasing condoms and I think the provocative packaging of the typical condom box plays a large part in that,” said Dustin Leonard, CEO at HERO.

“It’s crazy that this is the norm, given that women make up up to half of the overall condom market. We’ve designed HERO to be more appealing to women and our market research proves we’ve achieved that goal, with nearly 63 per cent of women saying they would be more comfortable bringing a HERO box to the register.”

The survey also revealed brands without any kind of social or environmental program are in danger of losing customers to disruptors that are part of the movement towards conscious consumerism.

It found an overwhelming preference for brands that are socially responsible and environmentally conscious, with 94 per cent of respondents saying they would switch to a brand that is associated with a good cause, assuming it had similar price and quality to the brand they were currently using.

“If HERO can create a sustainable business model around giving back to the community, then why can’t the bigger brands do the same? “Companies that are only concerned with lining their shareholders’ pockets don’t deserve the patronage of their customers,” Leonard said.

The survey found that more than nine out of ten women thought it was important for brands to be socially responsible and give back to society, while less than five per cent of respondents thought that businesses shouldn’t be looking at ways to reduce their impact on the environment.

What has HERO been up to?

As a socially responsible FMCG business, HERO’s one for one mission means that for every HERO condom sold in Australia and New Zealand, one condom is donated to a developing country.

To date, the company has donated 575,000 condoms to Botswana, an African country with one of the highest rates of HIV/AIDS infection in the world, and has pledged to donate another two million condoms by the end of 2016.

“Durex and Ansell had better be on guard. HERO has only been around for a couple of years, and has already received national distribution in Australia’s leading grocery and pharmacy retailers. With more women taking charge of their sexual health and purchasing decisions, we expect to continue increasing shelf space,” said Leonard.

HERO condoms are available at Woolworths, IGA, City Convenience stores and pharmacies. The company, which was founded in 2012 by 28-year-old Dustin, was also a recent Anthill 2015 Cool Company Awards finalist.