Who's the fairest of them all? Australia's iPowow provides live, online voting during beauty pageant -
Friday, January 21, 2022 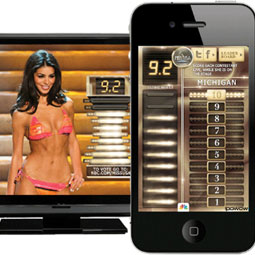 A Sydney-based interactive media company that has made its mark in international sports and entertainment ventured down the runway this past weekend, giving viewers of the Miss USA pageant a chance to express their opinions in real time.

The inclusion in the pageant was another coup for iPowow. The company’s viewer-response app, available for cellphones and computers, has been used for Ultimate Fighting Championship events, Top Rank boxing fights, Cirque Du Soleil and the American Music Awards.

The folks at iPowow say their tech pushes viewer interaction a step beyond the text-message voting that has been the fulcrum for reality shows such as the Idol music-competition franchise. iPowow customises the interface for each event; users can cast votes or simply push a slider to measure the strength of their preference. The aggregated results are displayed graphically on the television screen during the event. The promotional video offers examples of on-air hosts responding to the responses, as it were.

During Sunday night’s pageant telecast from Las Vegas, viewers were given the chance to express their opinions during the swimsuit and evening-wear competitions, and a slot in the quarterfinals was said to be reserved for the online viewers’ choice. That spot went to Miss New Mexico.

The pageant made it clear they were pleased as punch to hear from the online fans, but that the ultimate decisions would lie with the onsite “celebrity” judges (Penn Jillette! Mariel Hemingway! Lil Jon!). Miss New Mexico failed to reach the semifinals, the crown eventually went to Miss California.

It will be intriguing to see where this fusion of broadcast media and online interaction takes us. Will app-based voters eventually be allowed to choose the victor of a live event?