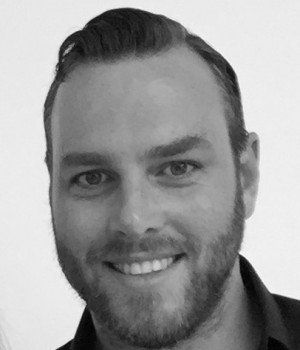 With the launch of his new FILLMYCLASS website, 33-year-old fitness entrepreneur Daniel Waide is making it easier for people in Melbourne, where he was born and raised, to go to the gym… even if it’s not theirs.

Following the model of last-minute flights or hotels, fitness classes with spare spaces are often available at a lower rate. FILLMYCLASS matches both fitness enthusiasts and newbies to excess class spaces in nearby gyms and studios.

“It’s all about flexibility,” Daniel told Anthill. “The goal is to get more people moving, and being able to pick and choose classes that suit you at any gym or studio means you’re more likely to get active and stay active.”

How did Daniel Waide build FILLMYCLASS?

Daniel entered the fitness industry in Melbourne as a personal trainer while completing his Bachelor of Applied Science in Human Movement at Melbourne’s Deakin University.

In 2007, he joined Genesis Fitness Clubs in Melbourne as the National Fitness Manager before moving to NYC in 2010 to become the Fitness Director at New York Sports Clubs.

In October 2014, Daniel left New York Sports Clubs to focus on starting his own web based fitness business – a gym comparison and deal site called everygym.

“I wanted to help people understand the different fitness options out there and make it easier for users to find gyms that would suit their needs and interests,” he says.

“I think I’m uniquely placed to do this having worked in smaller private fitness companies and large corporations.”

Pivoting to focus on what his customers loved

However, the site wasn’t great on mobile devices and many of the gyms and people Daniel spoke to really didn’t see it as a unique offering.

What they all did like though, he discovered, was fillmyclass, an interactive part of the site that helped users sign up for trial classes.

“I think classes are more social and shareable than deals and it’s hard to compare a yoga studio to a large gym that has a yoga class without giving them a go,” Daniel said.

“People have been more interested in accessing the specific classes and trying them out, compared to just getting a week free or other similar deals,” he revealed.

So Daniel scrapped everygym and focused on fillmyclass, even changing the entire name to upper case. He took the original Joomla site and had the developers remove everything except the fillmyclass feature.

He then designed the front end, this time with mobile front of mind (looking not to repeat his earlier mistake), using proto.io to draft how he wanted it to look and function.

After a long search, he found a front end developer who meshed the look with what already existed. “With each site, I always try and mock up a detailed, functional wireframe and then I use oDesk to have developers quote on cost,” Daniel shared.

What problem is FILLMYCLASSS solving?

Over the last two years, there has been a shift in the fitness industry towards more flexible products for users, as witnessed firsthand by Daniel himself with his everygym.

This coupled with the rise of specialty fitness class locations meant thousands of high-quality fitness classes are running under capacity in Melbourne every day.

“As you can see by our name, we aim to fill those classes,” he stated.

“Many people want to take classes, but are new to fitness or aren’t interested committing to long term products/packages,” Daniel explained.

“FILLMYCLASS gives people the chance to attend classes without the intimidation of a lengthy membership, or the inconvenience of limited locations.”

“You might want to attend yoga at a lunchtime studio near work, do a Pilates class on your way home, and meet a friend for a Cycle class near a café on the weekend. This site means you’re not limited by the geography or timetable of a single gym.”

“And for fitness locations, it’s a great opportunity to get people in the door, to try new fitness options and get comfortable with classes and instructors,” he added.

How exactly does FILLMYCLASS work?

When you go to the site, the closest classes to your location will appear on the ‘classfeed’ – kind of like your Facebook newsfeed but instead of a friend’s baby or a funny video, you get to see various fitness classes here.

You can either scroll through all the classes to find the one you like or search for a specific class and/or location. Once you find your class you select it and enter your details. And then you can even invite all your friends to come to the class with you if there are any spots still available. 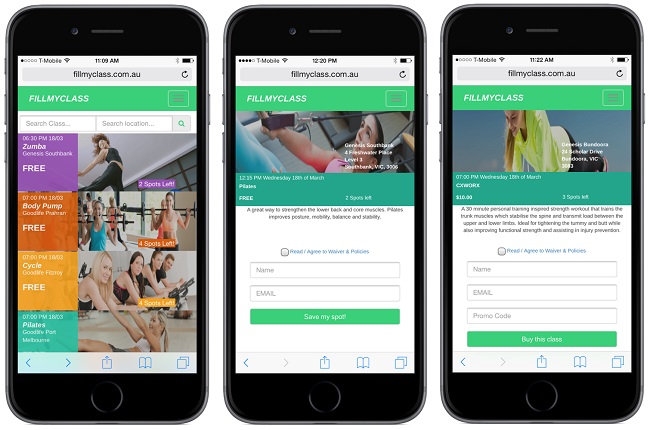 About his business model, Daniel revealed that FILLMYCLASS shares income from paid sessions with the fitness locations.

He further disclosed to Anthill that he also thinks there is potential to show ads in their ‘classfeed’ without affecting the user experience, though they haven’t gone down that path yet.

As far as what advice he has to share about building a start-up and a website from his journey so far with FILLMYCLASS, Daniel said, “I’ve learnt you don’t need a million dollars and a large team of backers to build something people will use.”

“So my advice is start now, get something out there and work to improve it each day. You can spend forever trying to get something perfect,” he added. “While I think FILLMYCLASS is awesome there are still many things I want to improve, fix and add.”

“Get something out and see if people want it before you spend all of your money.”

Daniel also recommends that you test a few different freelancers if you’re having someone help you build the site. “When looking for a freelancer cheap, good and fast don’t exist. You’ll have to sacrifice one of those.”