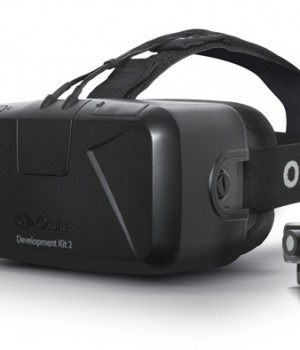 Have you seen The Lawnmower Man? If you haven’t, don’t.

It’s enough to make you laugh off the idea of virtual reality all together.

Instead, find an Oculus Rift and put it on your head. If the hype is to be believed, like the Oracle in The Matrix you could see the world without time.

The Oculus Rift is the forerunner of commercially viable virtual reality. It launched on Kickstarter, was bought by Facebook for the $2 billion, and is now in partnership with Samsung. The Oculus Rift (and by extension VR) is here to stay this time.

Christopher Panzetta of digital creative S1T2 believes the Oculus Rift can bring experiences like no other to audiences everywhere.

“It delivers a sensation so new but at the same time, accessible; it’s just far along enough to make the optimist believe the time for virtual reality near,” said Panzetta. “For now, it’s going to be the audience’s first and memorable experience of VR. Audiences can experience sensations as opposed to observing them. It’s already very accessible. This piece of technology has the potent and not very subtle ability to force your audience to feel. It works on the most basic of biological levels. This is the key to the technology’s longevity in the digital marketing space, and where your power as the storyteller lies.”

But, people have seen the concept of VR fail to live up to its hype once. Why did that happen, and what is different this time around?

“I just don’t think there was much of an appetite at the time. Businesses were still scrambling online, consumers didn’t carry supercomputers in their pockets, and when you said ‘gamers’, you didn’t think of adult women. The hype cycle’s still there, but what’s changed is you have half the VR equation in your pocket. Also, big players are behind it, content creation can be a bedroom enterprise and most importantly, the tech is much closer to delivering on its promises,” Panzetta explained.

Panzetta reckons VR will place competing demands on content creators. “For Oculus, the partnership with Samsung and purchase by Facebook is telling that they don’t see their future in hardware. We already see cardboard and 3D-printed VR sets so it’s going to be more about the platform and network for VR content and users.  The yellow brick road may be steam-paved for Oculus, but they may face some early competition as a platform from the traditional game consoles such as Xbox and PlayStation, who already have the umbilical cord into the world’s living rooms,” he said.

And, with obesity at an all-time high, how does Panzetta think Oculus would answer the charge that they are simply enabling humans to be even lazier? “If anything, VR gives us the ability to re-introduce movement into the equation. All the Oculus paraphernalia, like the Myo, Omni etc. encourages physical activity.”

VR needs to get up to scratch first, and most importantly, the challenges of movement need to be overcome. After that, Panzetta would bet on an explosion of content creation, not as rapid as the App Store, because it relies on a 3D space, but a definite increase.

“Surprisingly, I would pick the commercial space to be among the early adopters, as the requests we’re getting are all for simulation-based experiences,” he said.