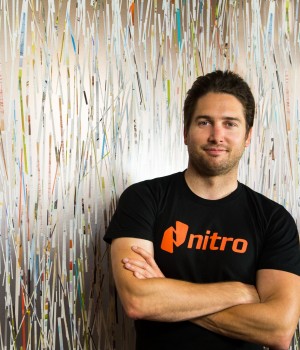 Australian start-up success story and leading document productivity company, Nitro has secured US$15 million in funding (Series B round) from top tier US venture capital firm Battery Ventures to accelerate its vision of bringing smarter documents to everyone.

Prior funding comprised a Series A round of $6.6 million from Australian venture capital firm Starfish Ventures in 2012, so this latest round brings Nitro’s total funding to $21.6 million.

Michael Brown, general partner at Battery, will now join Nitro’s Board of Directors.

Companies use Nitro to eliminate paper-based processes like printing, faxing, and scanning, and help employees and customers share, sign, approve, track, and collaborate on documents faster and more securely.

With its products such as Nitro Pro and Nitro Cloud, Nitro aims to make it easy for businesses to share documents, and work with shared documents on any device.

Close to a decade of success

Founded in Melbourne in 2005, and profitable ever since, Nitro is on track to reel in around $30 million this year and has been doubling its revenue every two years for five years.

With more than 490,000 businesses in nearly 200 countries using Nitro today, including over half of the Fortune 500 and high-flying start-ups like AdRoll and KISSmetrics, the company now has over 150 employees in five locations, including its San Francisco headquarters.

It is the leading alternative to Adobe Acrobat and is now Lenovo’s PDF software partner.

One of the fastest-growing private companies in the world, Nitro is also a multiple Inc. 500/5000, BRW Fast 100, Deloitte Technology Fast 50 and Software 500 award winner.

Founded in 1983, Battery Ventures is a top ten VC firm in the US. It has raised more than $4.5 billion since inception and is currently investing from a US$900 million pool of capital.

Sam Chandler, Nitro’s founder and CEO (pictured above) spoke to Anthill and below is what he had to share about his company’s latest milestone.

What does Nitro plan to use this new $15 million funding for?

We’ll be using this funding across the entire organisation – product, engineering, sales, marketing, customer success – we’re investing across all departments and in all regions.

You may have read that we want to bring smarter documents to everyone – what this means is we’re democratising document productivity.

For a long time, Adobe Acrobat was the only player at the party when it came to first generation document sharing. But it was too expensive for most companies to roll out across the board, so we released Nitro Pro and the rest is history.

We see our next product, Nitro Cloud, as the next generation of document sharing. We see the same opportunity as we did with Adobe some years ago.

However, today our competitors include the myriad of products and services that all fall into the broader category of “documents in the cloud”.

We believe we can dramatically change the way businesses work. We want to help them close deals faster, accelerate human resource processes and collaborate more efficiently.

So what does the funding do? It allows us to build new and better products and improve productivity in businesses from the Fortune 500 to the SMBs the world over.

Nitro is an Aussie founded company, why did you choose to seek venture capital funding from the US?

It’s no secret that US venture capital funds have much deeper pockets that anywhere else in the world – Australia included. The US was the only place we could raise $15 million with the potential to raise tens of millions more if the need came about in the future.

Add to that, US venture capital firms are more experienced at later stage investing.

What next for Nitro now?

Our Melbourne office will continue to grow, even if not at the same rate as San Francisco or Dublin. As you can imagine, Melbourne is our old hunting ground – the company was founded there – so we have a very special connection to Australia. Australia is also very much rooted into our company culture so it’s important to nurture our Aussie foundations.

We certainly want to grow our presence in Asia in the next decade, and we can see Melbourne becoming a hub for the broader Asian region.

We might not have the level of penetration in Asia as other markets at the moment, but we expect to see more revenue from there in years to come. We are Lenovo’s PDF partner (Nitro Pro comes preloaded on Lenovo PCs all over the world) and Lenovo has dominant market share in China and Japan, so we’re looking to leverage this down the track.

Naturally, if we are successful, an IPO in the USA would be the next logical progression for our business and Battery has an outstanding track record in this regard.

What strategy has Nitro used to reach this level of attracting such a huge amount of venture capital funding?

Our success comes down to us remaining focused on our fundamentals: providing products with powerful features that are the easiest to use and easiest to deploy in the market.

We also have the best customer service in the industry, just look at our Zendesk Global Benchmark results: 95 per cent customer satisfaction versus 79 per cent for the industry, and an average customer support first response time of 1.7 hours versus the industry average of 25.9 hours. Very simply, the user and customer experience is better with Nitro.