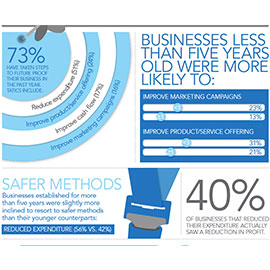 Innovate or perish. For those that mistake the dictum for a dilemma, here’s proof.

A nationwide survey by American Express found that small business owners who innovated to overcome economic uncertainty reaped rewards while those that defensively fell back on cost cutting saw profits declining.

Of the 1,003 small businesses surveyed, nearly three in four acted to “future-proof their operations” when faced with a risky and uncertain economic environment. Of them, nearly a quarter improved their product or service offering, resulting in increased profits for half of them. Similarly, 57% of small businesses that ramped up marketing activity also enjoyed higher profits, and most of those that worked to improve their cash flow reporting higher profits.

But a significant 40% of the businesses chose to cut expenditure and saw their profits decline. That is not all. Now nearly a quarter of the businesses that cut costs expect another bad year in which profits will likely fall.

“It really is a tale of two profit lines being driven by two fundamentally different approaches to business survival,” said Jason Fryer, head of Small Business Services at American Express.

“The results of this survey provide food for thought for businesses focused on future-proofing their operations. There are valuable lessons for all of us here,” he added.

The survey of 1,003 small business owners, each with an annual turnover of up to $2 million, was conducted for American Express by Galaxy Research.

A second major finding of the survey is equally profound. Businesses older than five years were more inclined to resort to “safer internal methods of future-proofing, including reducing expenditure,” when compared to their younger counterparts.

In contrast, younger businesses were more likely to innovate by “implementing or improving marketing campaigns” and adapting their product or service offering to capture more market share.

American Express cited the experience of a younger company beefing up its service offering – from providing static guards and crowd controllers to all-encompassing security solutions – and profiting from it.

“In the past 12 months we have invested significantly in our monitoring capabilities, offering our clients around-the-clock protection and emergency response,” said Michael Cohen, director of Executive Security Solutions. Cohen is a winner of Anthill’s 30-Under30 awards this year.

The move paid off. Executive Security’s revenue rose 37% over the past year. “Our clients get the best of both worlds and we find ourselves competing on a different platform which has helped drive growth and profitability,” said Cohen.