HeadPal lets you view media without having to hold your phone
Saturday, January 22, 2022 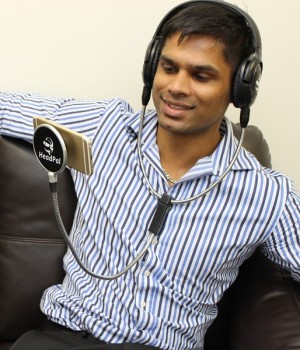 With 85 per cent of Australians owning a smartphone by mid-2015 and an increasing number of consumers reporting to the doctor for ‘Tech Neck’, HeadPal is offering a solution in form of a brand new accessory which allows users to view media without the inconvenience of having to hold or balance their smartphone.

While there are many other smartphone mount accessories on the market, what makes HeadPal unique is its ability to morph into differed modes, with three main features to suit the needs of all users.

What is the story behind HeadPal?

Prior to establishing HeadPal, CEO and founder, Adam Agresta was on the path to become a successful DJ landing gigs at well known Sydney venues such as the ivy, Greenwood Hotel, Home nightclub and more. He also has a combined 10 years’ experience in sales and customer service having worked for some of the top banks within Australia.

There is a theory that suggests that because Adam was DJing and working in a call centre at the time HeadPal was conceptualized, that is what brought the idea to mind of the relationship between the Bluetooth connectivity, the headphones and the ability to be able to use your smartphone handsfree.

Adam is the first to admit that he is an avid phone junkie, especially when in bed, on the lounge and on an aeroplane. Due to the fact that he was spending as much as an hour watching videos and reading articles on his smartphone, he quickly identified a problem and that was the fatigued arm, sore neck and constant re-adjusting for a new position when having to hold your smartphone up for an extended period.

The first phase Adam went through was R&D. The idea had to be brought to life through 2D and 3D CAD drawings and once realised, the problem had to be validated through surveys. Fast forward one year and now Adam is a mere few months away from implementing his very first business idea.

As a young and fresh entrepreneur, Adam is particularly looking to ride the wave of the Federal Government’s “Ideas Boom” saying that the announcement came at a great time for his business, which has launched a Kickstarter campaign to support the commercialisation of the HeadPal device ahead of the planned March 2016 release.

The government’s new innovation agenda will see a more holistic approach for innovative start-up businesses and addresses many parts of the innovation problem ranging from financial incentives for universities to link with business, offering a boost to venture capital, changes to corporate and tax laws to encourage start-ups, as well improved science and technology education in schools.

“To compete with the global players in the industry is challenging, and has proven one of the biggest obstacles for start-ups in this arena. The fact that we will have a little more freedom and flexibility to compete on the world stage is a great place to start,” Adam said.

Check out HeadPal in action below