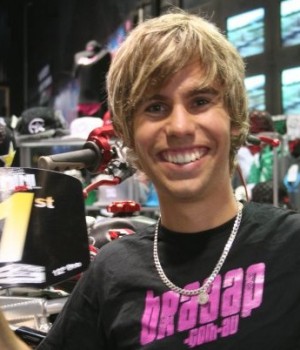 Brad Smith started braaap Motorcycles from his parents’ home when he was just 16.

He had just discovered a new genre of his favourite sport, motorcycling, which involved shorter tracks with higher jumps on mini bikes that were built for adults. However, the bikes were all custom-built and expensive – they cost between $10,000 and $15,000.

So in 2005, when he turned 18, Brad sold his car and bike and headed off to China on a mission to find a manufacturer that would support him in building a custom-built adults’ mini bike that could compete with the Americans’ but still be affordable to the masses.

He approached over 50 manufacturing plants on that two-week trip but being so young, it took his prospective partners a while to realise that his expertise was beyond his years.

It was only two days before he came home that he finally managed to cut a deal with a plant. They used his knowledge and enthusiasm about bikes; he used their money and establishment.

Brad then proceeded to create cool retail stores from where to sell the bikes.

He now designs, manufactures, retails and exports the only Australian motorcycle, with stores across Australia, New Zealand, the US and the UK.

braaap offers a lifetime warranty as well as learn-to-ride programs.

Brad promotes his company on the public speaking arena and at business seminars.

He also sometimes shuts down the streets in front of his stores and holds street parties, where he brings in mobile ramps on which his team entertain by doing crazy tricks in the air. Local bands play and competitions for BMX, scooters and graffiti artists are held.

Is there any better way to get a buzz going than throwing a party?

“Brad is obsessed with growth, he is known as the growth man,” one braaap Motorcycles employee, Andrea Smith revealed to Anthill. “He designed a system known as GAS Plan, which stands for Growth Anticipation Structure.”

“We work out end result, how much money we need for budget and the work backwards to find out how many people we need to get in front of to create leads. What is our percentage close? What is the average sale? It’s all maths,” she explained.

Andrea disclosed that in 2012, braaap did a 400 per cent increase in four months using Brad’s GAS Plan system at a time when most of their competitors were struggling.

I find the best in every situation. Failure is not an option. I have 100% belief in where I am going and what my end result is.

Use the Tweet button at the top of this page. Your tweet will say: Congratulations Brad Smith, Anthill 2014 30under30 winner!