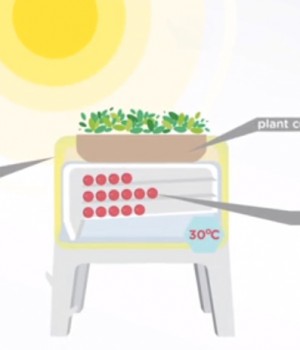 This ad comes from Leo Burnett in Columbia. And, it’s more than an ad.

I’ll say straight up that this invention is awesome but, that I also have a problem with a few aspects. Namely, that it was used to chill and distribute Coke in a remote Columbian village.

The fact is, there are far better things that could have been chilled and given to the people of this town. But, it’s also probably only Coke that had the funds to create this invention and, be bothered to send it to one of the hottest towns in Columbia.

For those who endures the 45+ degree days in Melbourne this year, you’ll understand how hot this Columbian village is. Damn hot. But, unlike Melbourne, there is no electricity. So, Coke created a bio cooler. What’s a bio cooler? It uses evaporation to cool a confined space.

It works remarkably well. The outside temperature was 45+ degrees. The cooler was less than 10 degrees inside using plants, water, sand and the heat of the sun. It’s a nifty bit of physics at work.

And, while this invention has begun with cooling Coke in a remote town, there are hopes that it can be used for other things – cooling food, medicines and vaccinations in remote, hots parts of the planet.

If that comes to fruition, then I will applaud Coke for taking the initiative.

The Coca-Cola Bio cooler from Leo Burnett Colombia on Vimeo.