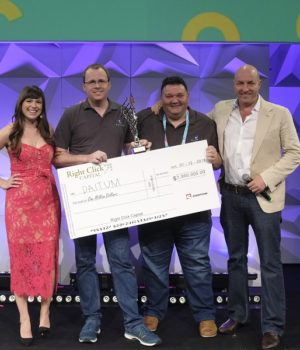 “StartCon searched Asia Pacific, home to over four billion people, to find the top 600 startups in the region. Through regional finals in 15 cities across Asia  in the past months we narrowed this down to the final 30 who competed on the weekend to narrow down to the final six on the main stage at StartCon,” said StartCon CEO Cheryl Mack.

“In the end, Daitum won over the judges, claiming the $1 million term sheet from Right Click Capital. Congratulations to the whole Daitum team! I’d also like to congratulate the hundreds of other startups that participated this year; these pitch events may prove to be the springboard to global recognition for promising startups from the entire region,” Ms Mack said.

What exactly does Daitum do?

This year’s winning startup, Daitum, is an Australian-based artificial intelligence (AI) company, born out of the vision to make decision analytics accessible to everyone. Founded by a team of world-renowned computer scientists, Daitum empowers enterprises to turn data into actionable decisions at the click of a button.

“We’re very excited to have won, and we hope that this will allow us to rapidly grow the business and get our technology into the hands of more and more businesses,” said Daitum director Ian Scriven.

The Pitch for $1 Million Principal Partner, Right Click Capital – part of the global Draper Venture Network, which collectively has US$1.8 billion in assets under management – will work closely with Mr Scriven and the wider Daitum team, with the funding used to further develop its proprietary technologies, as well as scale and expand its business operations globally.

“Congratulations to Ian and the Daitum team. Together with the other judges, we were thoroughly impressed by their founding team of PhD-qualified scientists who live and breathe AI,” said Benjamin Chong, Partner at Right Click Capital. “It’s wonderful to see an Adelaide-based company make it through to the grand finals of APAC’s largest pitch competition. We are proud to partner with StartCon, and look forward to finding and backing more great tech companies with founders who have big dreams.”

The StartCon Pitch for $1 Million grand finals were held as part of StartCon 2018, the largest event of its kind in Australia. Hosted by StartCon at Sydney’s Royal Randwick Racecourse on 30 November and 1 December, the event featured over 60 international and local speakers, more than 150 exhibitors and more than 4,200 attendees. Regional finals were held in Perth, Brisbane, Darwin, Seoul, Singapore, Regional Victoria, Manila, Jakarta, Shanghai, Adelaide Melbourne and Sydney.

The top six finalists in this year’s Pitch for $1 Million competition were: The Noisy Guts Project from Perth, Australia; Halal Local from Jakarta, Indonesia; Miro from Hong Kong, SAR; Frontier Microscopy from Adelaide, Australia; and FloodMapp from Sydney, Australia.