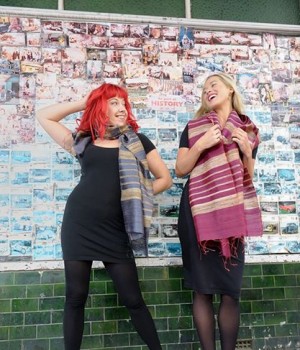 In 2013, the devastating Bangladeshi factory collapse that killed 1,127 people left many consumers with questions about the ethics of multinational fashion retailers.

Some of us may wonder if there was a way in which we could get our fashion fix in a socially responsible way, without the fancy boutiques and hefty price tags.

Well, it seems like socially responsible fashion will no longer be a pipe dream.

For Women, By Women

Enter The Fabric Social, a girl-powered social enterprise that aims to harness the power of smartphone technology to bring the global marketplace right into the hands of women entrepreneurs in conflict zones.

The company is the brainchild of three young women from Melbourne, who have been living and working on humanitarian development in India.

So let’s remove the middle-men, shall we?

The idea is simple.

By tapping into existing on-the-ground projects and adding simple technology, The Fabric Social aims to boost the profitability of these projects, thereby empowering women in conflict-affected areas.

With the use of the iOS, small grassroots enterprises have a better chance of flourishing as they can hopefully access international fashion markets. At the same time, fashion-lovers around the world can purchase clothing directly from women’s cooperatives through an online store.

Women entrepreneurs can spend hours upon hours weaving a beautiful piece of clothing only to turn in a tiny profit, while large clothing retailers cushion up their bottom-lines. Fabric Social seeks to compete directly with these retailers.

Fabric Social is a small start-up with a big dream of taking on the war machine, one click at a time.

Detractors may question the feasibility of introducing smartphones to rural regions.

However, co-founder Fiona McAlpine is confident.

“The assumption that women in the field will be unable to understand a smartphone is preposterous,” she said.

McAlpine also revealed that the company is taking considerable care in their app development to ensure maximum usability, keeping in mind the fact that many of the women in the field will have limited, if any, literacy.

It’s a superficial world of fashion after all, and it takes more than a snazzy app and an online store to sell.

The Fabric Social has engaged a fashion designer to help create its first clothing line – a creative fusion of modern designs and traditional techniques that will be produced by these women’s cooperatives.

The result is hopefully fashion that is unique, accessible, and socially responsible.

The Fabric Social will be running its pilot project of supporting the women in Northeast India, which is home to more than 100 armed groups, and a form of martial law that provides virtual impunity for rights violations.

Thus far, the company has received overwhelming support from the Melbourne social enterprise community, as well as from software developers who have volunteered to assist in the project. The Fabric Social is in its seed funding phase, but has already garnered support from PayPal Australia and Pozible.

The company is set to be launched in Melbourne on July 12th.