What to do when business success hijacks the original vision -
Thursday, July 29, 2021 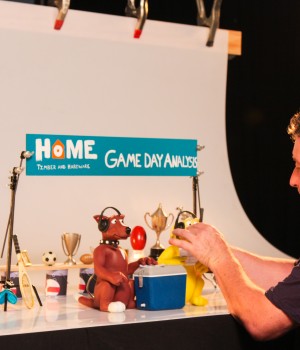 RICHARD Chattaway and Michael Cusack are serious businessmen who spend their days playing with plasticine.

They run Anifex, an animation company in South Australia that has created some of the most iconic and long-running ads on Australian television and across Asia. Think of dogs going whacko for Schmackos and you’ll start to notice their work everywhere.

To be everywhere seemed like a good idea until the pair realized that were doing no one any favours – not their clients, not their families, not themselves.

Growing from two men in a room to an animation company with clients across the world, Michael Cusack and Richard Chattaway discovered that in the personal and time-sensitive business of television commercials, paying attention to timezones was the key to international success.

The pair met when they were trying to get “sensible jobs” as primary school teachers.

Instead of becoming teachers, though, they made a stop-motion animated film. They did the sound mix for their film at the South Australian Film Corporation studios, and at the end of the process the Corporation offered the pair two-year contracts.

Serendipity and talent also allowed the still “painfully young” men to found their company as those contracts finished.

When their short film Waltzing Matilda won an Australian Film Institute Award, one member of the audience was Strephyn Mappin, a writer for advertising agency McCann Erickson. He asked them to animate an ad for Burroughs Computers. The ad ran continuously during the 1985 cricket coverage, giving the fledgling Anifex millions of dollars’ worth of free advertising for its unique style.

“There was nobody doing it in Australia apart from us,” Cusack said, “and at the time the advertising agencies were actually looking for something a bit different.”

Anifex had been founded in a single room at the SAFC studios, where they paid rent when they could. Their accountant was so convinced they would fail he advised them against forming a company.

They were young and poor, but, as Cusack says now, “We didn’t know any better, so that was fine.” After all, they could always go back to teaching.

By 1992, though, Anifex had outgrown the SAFC studios and needed to move.

Everyone was telling them that if they really wanted to succeed then they needed to leave Adelaide and move to Sydney. Everyone except Chattaway’s wife, who told him that he could go to Sydney, but it would be without her and the three boys.

“So I had to tell Michael that we’d be staying here,” Chattaway laughs.

It would prove a fortuitous decision as staying in Adelaide meant they could afford to buy a building in the heart of Kent Town, an inner-city nieghbourhood. It houses a studio, motion control rig, offices and workshops.

“It was the best decision,” Chattaway says. “We just couldn’t have afforded anything like this in Sydney.”

It was also the fulfilment of a dream.

“We always wanted to be an independent production company with our own studio, and masters of our own destiny. It was a treadmill we were more than happy to run on.”

Their growth was being driven by their burgeoning international reputation. “We started getting interest from all over the place,” says Chattaway. “From America, from Japan, Singapore, Korea and the UK.”

But in the intensely personal business of making television commercials, that was a problem.

The solution was to expand north – along the same timezone as Adelaide – choosing to work with clients in Singapore and Japan, rather than in the United States and the United Kingdom.

They followed up on that insight with regular marketing visits, including hosting an annual party for the advertising agencies in Singapore. “This business is all about relationships, so it was about making it easy for Singapore creatives to pick up the phone and talk to us,” Chattaway said.

It also helped when their work began getting their agency clients noticed at international advertising awards.

By 1998, Anifex was in continuous production. Their clients included Arnott’s, Colgate and a host of other major names. They were busy, they were successful, their work was on screens across Asia – and, Cusack said, they finally admitted to each other that they were “both reasonably unhappy”.

“That was five or six years when I didn’t animate a single frame – and that was killing me. It [the company] was hijacking us.” Plus, Chattaway says, adding extra clients was getting less profitable as they scaled the business up.

So having grown from small to big, and having developed towering reputations for quality, they decided to stop growing, get smaller, and become boutique.

“Our idea is that we promise a lot but deliver a bit more. Our clients can come in and watch the miniature sets and the characters getting set up – and they leave delighted,” Cusack said.

And they always want to take the character models away with them.

“Unfortunately,” Cusack says, a smile very much in evidence, “the materials – clay, latex – are really perishable, so we have to charge more for creating durable copies.”

Seventeen years after their first animated dog – they still go whacko for Schmackos, and if you watch not-very-closely, they are about to hit screens and billboards again with a major energy company campaign.