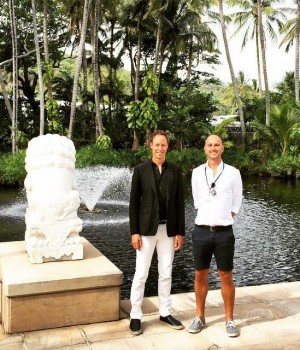 Ideapod, a social network designed for capturing and sharing ideas in their purest form, has launched in Australia.

Co-founders Mark Bakacs and Justin Brown (pictured) though based in America are Australian and moved to the US to pursue their business idea. After enjoying incredible success in the US, they have now officially launched in Australia after a year in beta.

Ideapod is right up there with Facebook’s engagement, an average duration of 15 minutes and has seen 35 per cent monthly growth in active users during 2015.

A couple of high profile thumbs-ups

Richard Branson recently publically endorsed Ideapod saying, “When I’m not debating ideas in person or perusing the comments on my online profiles, I enjoy visiting the website Ideapod; a social media platform for sharing ideas and collaborating.”

“I met the site’s founders late last year and have been hooked ever since,” he added. “By offering a space where people can bounce ideas off each other, IdeaPod increases everyone’s chances of coming up with game-changing concepts.”

World renowned artist, Marina Abramovic has also publically endorsed Ideapod posting her views on Aborigines online and Liminal, a virtual reality company launched after the founders met on Ideapod. How cool is that?

How exactly does Ideapod work?

Users create posts with a title, image/video and a description limited to 1000 characters. People share ideas related to whatever it is they are inspired by (not so much business ideas), from technology to spirituality to world affairs and health.

Mark and Justin also revealed that Ideapod also has a mobile app in beta called Capture by Ideapod for sharing 40 second videos and will be introducing an enterprise version of Ideapod in fully secured and private sub-domains on the site before the end of the year.

What is the story behind Ideapod?

Mark and Justin met at Melbourne High School in 1996 and have been close friends since.

In 2012, while Justin was doing a PhD in international politics in England and Mark was a practicing lawyer in financial derivatives in the Cayman Islands, they decided to create Ideapod together.

“The problem is that we are curious and seek inspiration every day in our lives, and the current dominant social networks are serving us an overload of uninspiring information, click bait articles and gossip from our social networks,” the duo told Anthill, about the motivation behind their start-up.

“There’s certainly a place for all of this. However, there’s also demand for a social network for ideas, where people go to feel inspired and connect with people based on shared ideas.

“Facebook is for friends, LinkedIn for professionals, Pinterest for interests, and Ideapod is for ideas. This is a social network where the user experience revolves entirely around ideas and inspiration.”

Shortly thereafter, they both left their academic and professional careers behind to focus full time on Ideapod. They initially created the business in England but decided to move Ideapod to the US.

Why? Well, they shared two reasons with us: one, there’s a very supportive culture for entrepreneurs in America and two, there’s greater access to capital for an early stage venture like Ideapod.

In fact, they have already raised $2 million in seed funding and disclosed that they are in the process of raising an additional round of financing from strategic investors.