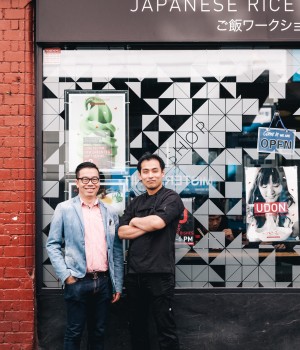 From an early age Melbourne based entrepreneur David Loh (pictured left) developed a keen understanding of what it takes to make it in a busy marketplace.

Upon migrating to Australia with his mother and two siblings, David was immersed in selling various wares at the weekly market from the tender age of 8.

This firsthand experience on what draws crowds back to a particular vendor would later prove to be very valuable to this young man who would go on to become a truly serial entrepreneur.

Entrepreneur made at uni

This early training in small business led David to go on to study accounting at Monash University.

By the age of 22 he had set up his first business venture, BubbleCup after seeing an opportunity to bring the extremely popular Bubble Tea to Australian shores from its Asian origins.

The venture was a huge success. Over the next eight years, David had established 10 stores before selling the franchise in 2008.

Returning to his university roots, David identified and seized another opportunity.

He entered a tender to Monash University looking to diversify their canteen offerings from average bain marie style cuisine and make it more multicultural and appealing to students.

David beat the big catering companies to become the chief hospitality operator at the esteemed university and was eventually asked to service the canteens of all Monash campuses.

His next venture was the Rice Workshop, a concept he developed with his chef, Tomohiro Suzuki (pictured right above).

They both found that although Japanese food is available in Australia, most people don’t know there is more to edgy and exciting Japanese food than just sushi and sashimi.

David opened the first store 18 months ago right in the heart of Melbourne’s China Town, perched between Tattersall’s Lane and Little Bourke Street.

Since the opening of the first store, the business has grown from one flagship store in Melbourne’s Chinatown to now having nine stores open Victoria wide and a flagship Sydney store in Westfield Pitt Street. David plans to have 15 Rice Workshop stores open by the end of 2015.

Since his early success with BubbleCup, David has established 5 other successful food ventures besides Rice Workshop.