Why Australian workers have lunch in office or skip it all together
Saturday, September 26, 2020 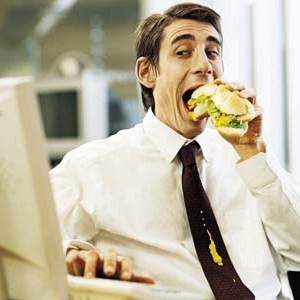 Eating lunch at your desk? Or skipping lunch all together? You boss could owe you as much as another week of holidays per year! It has emerged that many Aussie employees are working an extra 40 hours a year due to skipped breaks.

A study of 1,000 Australians found that 44% have skipped lunch to keep working, and 59% have worked while eating lunch. Furthermore, almost 80% of Australians take a break of 30 minutes or less for lunch and, almost half of us are so busy we skip the meal entirely at least once a week. 46% have checked work emails or taken work calls while on their break.

The increasing intensity of our nine-to-five grind means workers frequently pick convenience over nutrition when it comes to a midday meal so even when we do find time to eat lunch at work, our choices are often grim.

Almost two-thirds of the workers said they didn’t eat healthy lunches regularly, and only 31% said health and nutrition drove their lunchtime food choices. NSW workers were Australia’s most likely to forgo health for convenience – burgers, chips, noodles, pies and sausage rolls were among the most popular choices.

More than 85% believe dinner and breakfast are more important than lunch. Ironically, people too busy to eat a decent lunch could actually end up being less productive on the job. The Dietitians Association of Australia said the body required fuel in the middle of the day to keep it functioning properly through to dinner.

Spokeswoman Melanie McGrice said that meant a balanced, nutritious meal that would last through to the end of the working day. “If you don’t get that it affects your energy levels – but it also affects your concentration and your ability to be productive,” she said.

A separate survey of 1000 Sydney workers by the Grill’d hamburger chain found employees were clocking up an extra week’s worth of unpaid work each year by skipping lunch breaks. Almost a third cut short their lunch breaks for fear of getting into trouble with the boss.

Many of those questioned stated their desire to get ahead within the company, or that they felt pressure not to appear like a slacker. Almost one in five workers said they were worried if they take full lunch breaks every day people will think they’re slack and they won’t get ahead.

The survey also found that 16% of workers said they sometimes skipped lunch to impress their boss. The figure was much higher among younger workers, jumping up to 30% of 25 to 34 year olds and 24% of 18 to 24 year olds.

The survey also found professionals were the most worried about how they would be perceived for taking a lunch break. However, corporate psychologist Travis Kemp does not think that time in the office should be taken as a key indicator for office performance

“People are judged more and more about what they deliver and what they contribute, not by how many hours they spend in the office,” he said.

Of course, the fat cats still enjoy their long lunches. Business owners and managers took the longest breaks on average, while labourers got back to work fastest. Going along gender lines, however, it is women at 55% who are more likely to tighten the purse strings and bring in their lunch.

Associate Professor Paula McDonald from the Queensland University of Technology Business School said there was evidence work had intensified for many employees – particularly with technological changes – putting pressure on lunch.

“Eating lunch at one’s desk may be a very small marker of work intensification and the increased pace of life.”

All of this missed lunch adds up to a sizable chunk of time, which over a year or even a whole career could take a toll on both your health and your private life. Maybe we should ask ourselves if it is really worth the extra effort. What do you think? Is it OK to continue skipping lunch?