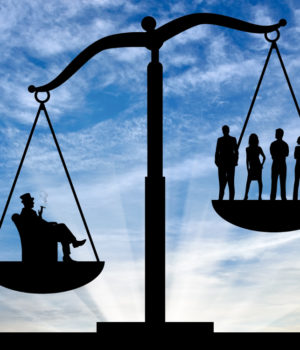 Can we truly count Australia among the world’s ‘wealthy nations’ when that wealth is not shared equally? Can we truly take pride in our country’s development and economic achievements when we know it’s not for everyone?

Income inequality is increasing in Australia: the wealthy are getting richer and the poorest 50 per cent of the population are increasingly struggling– a trend that has continued for nearly 30 years. In the past decade alone, the number of billionaires in Australia has more than doubled from 14 in 2008 to 33 in 2017.

While we might think of Australia as a country rich in resources with security and financial stability, it is in fact one of the major English-speaking countries with the greatest level of income inequality.

Our country also has the fifth largest population of ‘ultra rich’ in the world – individuals with wealth of more than $A65 million.

Australia is a society separating – when it separates on wealth, it separates on social, educational and health lines as well. A society plagued by such wealth inequality poses a real risk to social cohesion, community stability and an eagerness to embrace a national identity.

The vast wealth gaps should concern us all

It means that a large portion of our population, of our fellow citizens, are struggling to maintain a socially acceptable standard of living. Countless families cannot afford quality education or to acquire the skills they need to join the workforce. They are unable to contribute to or participate in our society in meaningful and sustainable ways – to which they have full right as citizens of Australia. The people most affected by low-income are single parents, the elderly, people born overseas for whom English isn’t their first language and those living in remote areas.

Excessive inequality means we all lose. The cracks in our social fabric are growing deeper by the day. Our country’s potential is left untapped. Instead, crime increases and hostility grows as those at the bottom feel disheartened, face discrimination, and look for their own solutions in and outside the law.

Health also worsens, including mental health, as fewer people can afford healthy food and quality care, seeking treatment only when an emergency strikes and fuelling obesity and related issues. Inequality can stifle growth as well as citizens can’t contribute to the economy fully and rely on the government for support. Political inequality is also increased as power remains in the hands of the wealthy and educated.

So how do we change this trend?

How do we fill in these deep cracks and ensure our nation is rich not only in resources but in empathy and in equity?

We need to ensure we have a fair tax system, one that creates funding for schools, public infrastructure and services, and hospitals. This will help fight inequality by creating more opportunities for those who need them most.

Let’s encourage the government to create more jobs and training opportunities for those struggling to find work or education. Let’s push for more childcare services and paid leave so everyone has an opportunity to care for their families and pursue employment. Let’s look at fiscal and monetary policies to help us achieve wider employment. Let’s support apprenticeship and learn-on-the-job programs within civil society.

It’s time we work together to fill the cracks in our society created by inequality and ensure no Australian is left behind.

Andrew Cairns is the CEO of Community Sector Banking