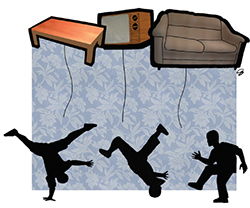 It’s probably fair to assume that when Lionel Richie sang “Dancing on the ceiling”, he was on an altogether different trip to William A. Calderwood of Peoria, Arizona, author of US patent 4888836 (1989) – “Lighter-than-air furniture”.

While Lionel and friends were cutting the rug atop someone else’s ceiling, Mr Calderwood was presumably brooding over the gravity, geometry and air density within what must have been his brutally claustrophobic abode.

His epiphany? Inflate your furniture with helium, tether it with pull-cords and allow it to float to the ceiling when not in use. Even the humblest apartment in Tokyo or Manhattan would be instantly transformed into a groovy dance floor.

In his patent application, Calderwood doffs his hat to prior art for beds and tables that fold away into walls, like those commonly seen in studio apartments during Lionel Richie’s heyday. But, he argues, these inventions were far too expensive, bulky and impractical for common use. Much better to pump the chaise lounge full of party gas and introduce it to the ceiling rose.

Other serendipitous advantages of having lighter-than-air furniture in your place:

Tragically, Lighter-than-air furniture never really took off. We’re still walking around our idle furniture, because too many people deemed the lighter-than-air variety (which could have been floating above them) to be beneath them.

If you have a business idea that you momentarily tried to pursue (but realise now that you should have known better), let us know.