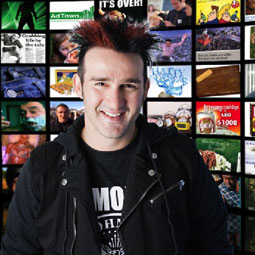 Punk rock was a feisty, confrontational trend that began in the ‘70s. Individualists who fell under its spell rejoiced in hell-raising antics with train-wreck consequences. But some kept their act together and moshed their way to success.

One example is Melbourne’s Fred Negro, still going strong after a biff with a tram. Another is ex-punk band keyboardist Andrew Mason, founder of the daily deals hub Groupon, who recently went out in style.

“All my businesses have an element of creativity,” says Sputnik, who has two employees. “I’m just trying to bring a bit of fun and optimism and awesomeness back.” There’s too much whingeing these days, he says.

Sputnik caught the punk bug in Adelaide in 1986 when he left school and went nuts. He was more like Boy George than Sex Pistols bad boy Sid Vicious, he says. Sputnik still sported tartan, safety pins, gun holsters – the works, topped by big hair that must have been Adelaide’s tallest structure, he says.

Still, he was career-focused. His first break, in 1988, was a job at an advertising agency where he worked his way up to creative director. In 1995, he founded his first business – the ad agency Out of this World, which he still runs.

Sputnik’s investment in the business, which he launched via a home office dial-up Internet link, was negligible. He was determined to go it alone, spurred by his loathing of “corporate bullshit.”

When Sputnik set up his ad agency MADtown in 2008, it was, he says, totally anti-establishment.

“I was sick and tired of what the official industry body was doing or not doing and decided I should do something about it. I ran the idea past one of my business mentors and he said, ‘Yeah, it’s a good idea, but how is it going to make money?’ which confused me a bit, because it was never about making money. It was about rocking the boat, putting the cat amongst the pigeons and creating change by being subversive,” Sputnik says.

He is still subversive, sometimes wearing pink bondage pants, even to black tie events, and relaxed because of the thick skin he acquired through dressing outrageously and taking flak in the ‘80s. Now his “passion project” is his “job hunters’ boot camp,” Swashbucklers, which tells interested parties: “Register now. And pay as much, or as little as you want.”

Unconcerned about money, he says, he makes ”sub-$100K.” Sputnik’s ambition is to change lives through reminding people how to have fun, smile in the face of adversity and be extraordinary.

Gold Coast-based Leela Cosgrove, 33, runs the marketing consultancy Strategic Anarchy with her husband Gulliver Giles – a fellow heavily tattooed punk. She founded the consultancy in 2005, bootstrapping it and ploughing back every cent she made from the venture. Now she loves the freedom it brings.

“When you run your own business, you have total control over what your company will and won’t accept – what you will and won’t do for money. You never have to prostitute yourself – you have complete control,” says Leela, adding that everything she and her husband do is part of their punk heritage.

During her 1994-1999 punk prime spread between Brisbane and Sydney, with her home-dyed hair and “punkified” op shop clothes, she was heavily political, she says. In 1995, she got suspended from school for organising a walkout against nuclear testing at Moruroa Atoll in the southern Pacific.

After school, for a while she thought she had to wear suits and be corporate, but then Cosgrove saw that the more she put herself into her business, telling her story and “getting her tatts out,” the better.

Punk taught her that there’s nothing wrong with materialism and making money, if you are honest, she says. Punk bands were absolutely businesses, run by people who have to pay their bills, she adds.

“I’m not a musician – not a songwriter. But I also make money doing what I care about and delivering my message in my way. I see these as being the same thing,” says Cosgrove.

In line with her belief in authenticity, Cosgrove urges her clients to express themselves as who they really are – in an ethical, uncompromising way.

She and her husband, who have four staff, freely swear, refuse to wear suits, and shun firms they do not align with – for example, those that trash the environment. Still, Strategic Anarchy turns over almost $1 million a year.

“Am I rich?” Leela says. “I guess by the $60,000-a-year average wage, yes. I don’t really think of myself that way. I don’t judge my success by the money I make. I judge myself by the difference I make. And by those standards, I’m pretty damned successful.”

Her ambition is to change how people see business, so that they stop conforming to crushing norms of success.