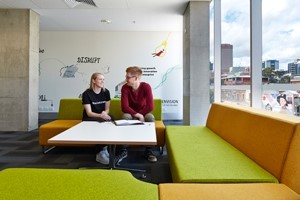 Venture Catalyst is an UniSA initiative, which provides up to $50,000 to students and entrepreneurs who are looking for financial assistance to turn their business ideas into reality. This seed fund offers a great opportunity for recent graduates and students to develop their entrepreneurial skills and make an impact in South Australia through their new commercial ventures.

To date, Venture Catalyst has awarded $200,000 funding to four companies: Jemsoft (an idea around intelligent security system for retail premises), myEvidence (an idea to increase efficiency of police work using technology), Vinnovate (an innovative new container closure aimed specifically at the wine industry) and Voxiebox (3D Holographic display that allows users to view and interact with 3D objects, animations and data without having to wear special glasses).

A success story – from idea to international business

When Jordan Green was 19 years old he found himself on the receiving end of an armed hold-up while working at a liquor store. He didn’t panic and did what he normally would do when confronted with a problem; he analysed.

The former UniSA computer science student then came up with the idea for a new technology aimed at preventing perpetrators from entering a venue by locking them out.

After receiving $50,000 in Venture Catalyst seed funding in December 2014, Jordan and Emily set about improving the technology and developed a prototype that could scan photos and videos to an incredible degree of accuracy. However, with little capital to pay staff to analyse the million-plus video and image samples, Jordan pulled an all-night coding session to build software that would allow cheaper labour in India to do it.

“That’s when I realised what I had built. It changed not only the computer vision industry but arguably almost any industry for good,” Jordan says.

The software allows any non-technical user to draw a box around an image and upload it to the cloud, where an artificial intelligence program would detect similar images as multiple scenarios.

The pair are now set to launch their intelligent software solution, which has already been licenced to a multinational consumer goods company for half a million dollars – and that is just one of a number of clients knocking on their door. Based on their contract pipeline, Jemsoft are now projecting $20 million in revenue this year.

To respond to the demand and their new revenue, this year they will increase their staff numbers from 9 to 20 and have plans to open offices in the US.

“We’re going to build a global company based in Adelaide,” Emily says.

How can you secure Venture Catalyst funding?

If you have an idea for a start-up and need cash injection, a team, brilliant advice or dedicated workspace, come find out more on how to apply at the next Venture Catalyst information session. It’s a great opportunity to develop your entrepreneurial skills and kick start your business idea!

In this information/pitching session, you will: