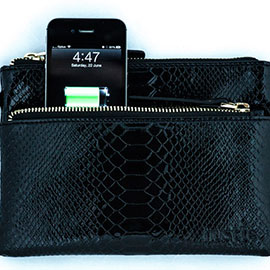 So, what did you do about your phone dying out early in the evening just when you were ready to make dinner plans? Or, about the decidedly uncool act of pulling out a charger and cable at the most awkward situations to recharge your phone?

Lisa and John Winters did. The couple – already in a marriage of fashion and finance – added tech smarts to come up with a stylish Hustle Bag that keeps charging your smartphones. Now they are close to raising the targeted $35,000 on the crowdfunding site Indiegogo. People, finally, are putting their money where their pain is!

The Winters’ gadget consists of two units: the bag itself and the Hustle Charge Pad. The bag is seamlessly lined with a 4250mAh power pack. So a user first charges the bag at home – by placing it on the charge pad. The pad also has a USB port, which means you can simultaneously charge your phone (or any other gadget) as well. Then, you simply carry the bag along and when needed plug your phone into a micro USB port inside the bag and recharge your phone.

Bag, clutch or wallet? Get them all

Hustle says its bags and wallets are compatible with any smartphone. For loyal Apple users, the Hustle includes a snap-on iPhone 4/4S and iPhone 5/lightning connector. But it can recharge many other smartphone brands including Samsung, Blackberry, Nokia and LG. The Hustle bag also has a “smart battery monitor,” which will alert you when the bag is nearing empty.

Hustle does not name its technology partners but says its manufacturers produce batteries and electronics for some of the world’s largest brands, and that all its products are globally certified.

For a young company still seeking early funding, Hustle has already lined up three products. The Hustle Bag is its flagship one for women, retailing for $249. It is “small enough to fit inside a bigger, everyday handbag and big enough to be worn on its own as a clutch or cross body bag.” It also offers a clutch, but unlike the bag this comes only in faux leather. The clutch retails at $199.

For men, Hustle offers a full-sized leather wallet that folds in half when you slip out its middle section. It then slips into your back pocket like any other wallet. It retails for $229.

The Hustle products are available for pre-order at up to 50 per cent discount to retail prices through Indiegogo until 11 August.

Funding will raise prospects for the future

Hustle’s crowdfunding campaign was slow to start with, according to John Winters, probably because the concept is relatively new to Australians. But it has since gained momentum. With nearly two weeks left – the campaign ends 21 August – it has already raised over $30,000, and it’s likely that Hustle will easily exceed its targeted $35,000.

“The response has been fantastic. We are constantly hearing complaints about poor battery life and this is a simple and stylish way to overcome an everyday problem,” John Winters told Anthill.

Once the campaign ends, Hustle’s owners plan to deliver the product to its backers and finalise distribution deals with “tech, IT and fashion buyers we are talking to.”

Lisa Winters studied fashion business and design at FBI Fashion College in Glebe. She has spent several years in the world of fashion PR, notably at Roxy Jacenko. John, who has nurtured an interest in technology from a young age dismantling his remote control cars, is a financial adviser at Perth-based Blackswan Equities.