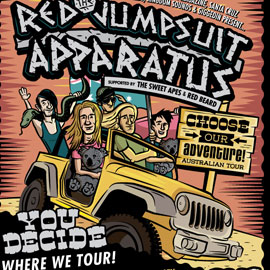 Just what can you crowdsource?

Ask Kingdom Sounds, the promoters of The Red Jumpsuit Apparatus’ tour of Australia, and its ticketing partner GiggedIn. In what might be the most innovative use of the technique, the promoters are giving rock fans an opportunity to vote for their most favoured cities for the live concerts.

The “Choose Our Adventure” tour concept will give fans the power to bring where The Red Jumpsuit Apparatus will perform.

“In a world first, the band will play six shows but the fans choose where; pitting cities against each other such as Hobart vs. Perth, Newcastle vs. Central Coast and Toowoomba vs. Gympie,” the promoters said

Giving the underdogs a chance

“We jumped on this innovative concept because it gives fans the opportunity to show how much they love and how much they really want Red Jumpsuit to come to their hometown.” said Laurie Mahon, lead promoter at Kingdom Sounds. “I’m hoping some of the underdog cities like Gympie win, but in the end it’s up to the fans to decide.”

Kingdom Sounds says it came up with the idea by first recognising that music fans in regional towns and smaller state capitals have, over the years, suffered because international acts mostly play in big cities. This has forced dedicated fans to travel long distances, at significantly higher cost, to see their favourite bands.

“Music is about the fans and GiggedIn is about giving them the power to make shows they want a reality,” said Edwin Onggo, founder of GiggedIn. “This will be the first time fans have complete control over bringing an awesome international act like Red Jumpsuit to their hometown and I can’t wait to see which towns fight the hardest to come out on top.”

Make your pledges. It’s in your hands now

The final locations will be determined through the website giggedin.com where fans “pledge” to buy a ticket online and are only charged if their city wins. Cities with the highest pledges win. The voting closes 8 August.

Here are the choices to make your pledges:

Thursday 7 November: Brisbane or Gold Coast or Toowoomba or Gympie

GiggedIn said about 3,000 people have “engaged with the campaign” since the band leaked details of the tour early on their Facebook page.

The Red Jumpsuit Apparatus will be launching their new  ‘Et Tu, Brute?’ EP during the tour.