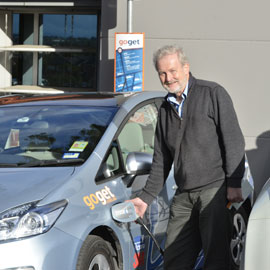 In a broad partnership with Toyota Australia, the Victorian government and Moreland City Council, GoGet launched Australia’s first Plug-in Hybrid Electric Vehicle program in a pilot program that will also study how drivers use the cars.

The Victorian government has established an EV hub as part of the Victorian Government’s Electric Vehicle Trial. The Moreland City Council runs the Moreland EV network, featuring three charging stations, including one of Victoria’s first publicly available “Fast Charge” station, which can charge an electric car in 30 minutes. And Toyota brings in the plug-in hybrids that have a longer driving range simply because they can also run on petrol, unlike the pure EVs.

“This is the latest example of how car share is moving to the centre of Australia’s transport picture because of its fast growing use and embrace by a wide range of people and organisations,” Bruce Jeffreys, co-founder of GoGet, said at an event hosted by the Moreland Civic Centre. “Today is all about platform – specifically how car share continues to become a platform for serious innovation, experimentation and discovery.”

Minister for Public Transport and Roads Terry Mulder, who was also present at the launch event, called the facility “another milestone in Victoria’s evolving EV charging network and an important step towards the state’s sustainable transport future.”

GoGet is deploying these plug-ins in high-density areas of Melbourne in order to maximise their use and the value of their data. It is also offering specia discounted rates to Moreland council staff as well as Moreland businesses and residents.

“The pilot project is a perfect opportunity to test the viability and popularity of these facilities in the Coburg area, with a view to this service becoming an ongoing offering,” said Moreland City Council Mayor Cr Oscar Yildiz.

GoGet, which turns 10 this year, runs its car sharing service in Melbourne, Sydney, Adelaide and Brisbane., where it is integrated with the public transport. Started in 2003 with three vehicles and 12 members, GoGet today has over 1,100 vehicles and 30,000 members.