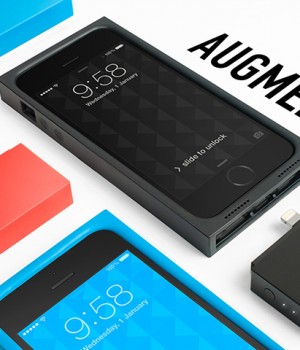 AUGMENT is a modular charging solution for iPhone. The product lineup consists of two components, the AUGMENT Case and AUGMENT Charge, which fit together in a modular fashion.

“Personally I had always been frustrated with mobile charging solutions.All battery cases are bulky and a permanent commitment, doubling the size of your phone even when it’s fully charged. Power banks are big, bulky and you need several long messy cables to use them,” said Will Matters, Industrial Designer at RUBIX.”

“We wanted to come up with a solution that was versatile. That could be there when it’s needed, without being an inconvenience when you don’t.”

Matters founded RUBIX in 2013. He moved from Adelaide to Hong Kong in 2010 to work for a design and manufacturing firm as a designer and project manager. His experiences there led him to venture out on his own last year, when he first envisioned AUGMENT.

AUGMENT Case has a distinctive visual design and provides  protection for the iPhone by using a soft TPU rubber outer layer and hard PC inner construction. AUGMENT Charge packs 1,200mAh into a device that weighs only 38 grams and easily fits inside a coin pocket.

Using the AUGMENT case is the same as using any other protective case and doesn’t interfere with any of the device functions. The device also does not require an adaptor cable in order to use headphones.

The AUGMENT Kickstarter campaign is already over halfway to its goal with plenty of time left on the clock. Those who back the project can expect to take delivery of their AUGMENT products later in the year.

As for RUBIX, when asked what the future might hold for his company, Matters added, “After Kickstarter, we have plans to expand both the number of compatible devices and the range AUGMENT modules and accessories, starting with a dock for charging at home.”