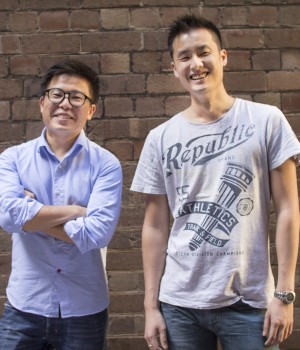 The acquisition caps off a stellar run for Airtasker, which now has 130,000 community members across Australia and an annual task run rate of over $4 million, with 3x growth so far in 2014.

The rise of outsourcing in Australia

Airtasker has become an online phenomenon with its on-demand army of skilled workers being called on to do everything from standing in a six hour queue for the Game of Thrones exhibition to delivering Gelato Messina cakes to hungry office workers.

Remember the story of Rod, the Sydney neurosurgeon who had to pop the question within five days and needed someone he could trust to fly to Houston, Texas and bring back the very expensive engagement ring? It was Airtasker to the rescue…

Occasional Butler was founded in 2012 by Erz and Jodie Imam, who have built a large community of people helping each other get things done – everything from cleaning, gardening and handyman jobs, to romantic jobs like “create and deliver a picnic hamper”.

They will now join Airtasker as community development advisors.

“After meeting with Airtasker we realised that we shared a parallel vision of how a services marketplace should grow and we quickly found we could create an even better customer experience by forming one big marketplace across Australia,” Erz and Jodie Imam said in a statement, about their motivation to agree to the acquisition.

Airtasker co-founder and CEO Tim Fung (pictured left, above, with his co-founder Jonathan Lui) concurred with the Imams saying, “We both realised that one marketplace works exponentially better than two separate marketplaces – because of the “network effect” of which the benefits multiply across every other active user.”

Fung further revealed to Anthill that they acquired Occasional Butler “because they demonstrated that they were able to build a strong task economy in another geographic area – Melbourne, which is Australia’s second largest urban city.”

He remarked that the acquisition of Occasional Butler would aid Airtasker’s mission to build Australia’s number one services marketplace and said they will be introducing Occasional Butler users to the Airtasker platform and importing their “hard work” into the system.

The acquisition follows a previous acquisition by Airtasker of rival TaskBox in February 2013.

Looking to grow beyond these borders

With this latest acquisition complete, Airtasker is now exploring international opportunities for expansion and executives have spent significant time in New York in recent months.

“We have built Airtasker as a scalable marketplace platform, rather than an “agency approach”, so that it can be scaled to geographies around the world as quickly as possible,” Fung told Anthill, about the growth potential of the platform.

“What we mean by this is that we have built an open community marketplace (much like Airbnb, nothing to do with the name!) – which means that that anyone can sign up and become part of our community,” he explained.

“However, to get the best results and increase earnings, users are implicitly encouraged to create a strong, trustworthy profile and make sure that they complete quality work to get feedback,” Fung added.

“We believe this is the fairest economic system because it allows the largest possible number of skills and time availabilities to be introduced to the market and the rules for each of our users are the same, providing everyone with an equal opportunity to monetise their time and talent.”