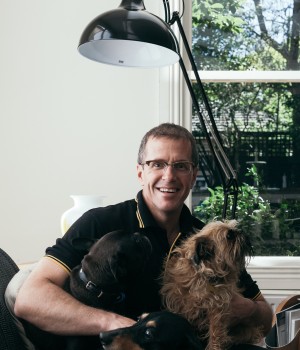 ‘Never let the customer leave emptyhanded’ was Philip Bartholomew’s mantra when he founded his first pet supplies business in 2001.

And it is one that has served him well as he now runs Australia’s largest online pet supplies retailer, My Pet Warehouse, a thriving company that is on track to reach $32 million in revenue this financial year.

And Philip has no intention of slowing down. “We want to be the number one player in the online space, with a revenue target of anywhere between $75 million and $100 million,” he says. Of big hairy goals…

With 10 stores operating nationally and with a couple more stores scheduled to open by the end of this year, the online space is not the only sales platform for this pet supplies company.

Approximately 45 per cent of sales still come from retail stores, although Philip knows the online space is the major growth opportunity for the business.

Philip’s business philosophy is quite simple, “Look after the customers and they’ll look after you. It doesn’t matter what industry you’re in, just look after your customers.”

From ensuring the customer is always entertained, to keeping prices leaner than competitors, Philip’s skill in engaging, stimulating and attracting customers is one he developed at a young age, while working in his family’s retail business.

What is the story behind My Pet Warehouse?

Now the sole founder and owner of My Pet Warehouse, Philip knows a lot about pet supplies.

But this wasn’t always the case. In fact, when Philip started his first business, The Pet Warehouse, in 2001 he is happy to admit he knew nothing about the industry – except that there wasn’t a pet store within 30 minutes drive from his home in Alexandria Sydney.

Philip did, however, know a lot about retail and in the first few days of opening he had exceed his revenue targets by over 100 per cent. “If you’re a retailer you can retail anything – be it women’s clothing, pet food, whatever, as long as you have the right principles in place, which we did.”

The core principles that have underpinned every decision at My Pet Warehouse are: have the greatest product variety, at the best price, and always excel in customer service.

Within 12 months of opening his first store, Philip was approached by a new competitor in the market, Petbarn, to merge companies and assume the role of CEO – a position that Philip held for two years.

It was in June 2009 though that Philip launched his most successful business venture to date with My Pet Warehouse, which, after 6 short years has grown into a $30 million national retail chain.

His advice to those looking to enter the retail space? “Retail is very time intensive so you’ve got to work smart, work hard and always, always look after the customer.” He recently shared more details about excelling in retail in this article.

What lies in the future for My Pet Warehouse?

Phillip told Anthill more about himself, the plans he has for his steadily growing company and how he has made it what it is today, in the interview below.

Who is Philip Bartholomew?

Back in 2001, just before I started The Pet Warehouse, I was settling down with my wife who was pregnant with our first child.

I also had my dog, Ralph who actually inspired me to tap into the industry because I became frustrated that I had to drive so far just to get quality dog food for him. Ralphy is still with us today and we’ve got two other dogs now, Taxi and Lulu (and three boys as well!).

I didn’t have a lot of business know-how, I learned the basics from my father and my time working retail. What I did have was the passion and the drive to succeed and a whole lot of waggy tails surrounding me.

I understand you have some really ambitious plans for your business, what exactly are you up to?

We’re in the process of opening up shop Australia-wide. We already offer same-day delivery in all capital states and territories through our online store and we’re getting consistently positive feedback from this service.

As a team, we’ve done this all three times before in our previous ventures. I admit, it’s an awful number of experiences to draw upon to avoid making the same mistakes but we learn from the past.

How do you plan to turn My Pet Warehouse into a hundred million company?

We know the pet industry well – in fact, we know it intimately. We understand the supply chain, the legal and the physical perspectives.

What challenges do you anticipate? How do you plan to overcome them?

It’s important to understand that challenges come in all shapes and sizes and to deal with them, we prioritise. We will continue to re-assess the situation at hand and use our knowledge to pre-empt issues before they surface.

Ultimately, a key thing to remember is that we’re commercial so we think commercial.

How has My Pet Warehouse been funded so far?

In regards to funding, we’ve bought and sold a number of stores.

Most recently, we’ve sold five stores in Victoria and bought more locally and interstate. Subsequently this will fund the next significant portion of our growth.

Over the next three months we will be going through our consolidation phase. We plan to open even more stores nationwide and keep revaluating depending on cash flow and profits.

We’ve supported the business with a certain goal in mind – we want it to become self-funding. Going forward, we plan to turbo charge the growth with additional equity.

That’s the plan and we’re sticking to it.