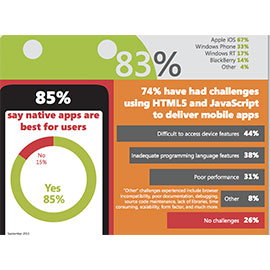 Windows developers are chafing at the bit!

In the growingly mobile world, opportunities are manifold but the traditional developers find themselves short of key skills and tools, besides being frustrated by the cost and complexity of supporting multiple devices and platforms.

That is the finding of a survey by Embarcadero, the global provider of software solutions for application and database development.

“They are either too complex or costly, require too many skills, redevelopment or porting, or don’t fully support native device functionality,” he added.

The survey respondents were predominantly Windows developers but the broader environment – with multiple platforms and multiple devices – challenges developers of all stripes.

“This independent, global survey of application developers confirms the brutal challenges they’re facing as the shift from desktop apps to connected mobile devices unfolds,” said Tony de la Lama, senior vice president of marketing and R&D at Embarcadero Technologies.  “Developers have been telling us they must support existing desktop apps and at the same time make them available on mobile devices.”

The global survey was conducted by Dimensional Research and comprised of 1,137 Windows developers from around the world. Of them 221 were Australian developers.

Here are some key findings of the global survey: